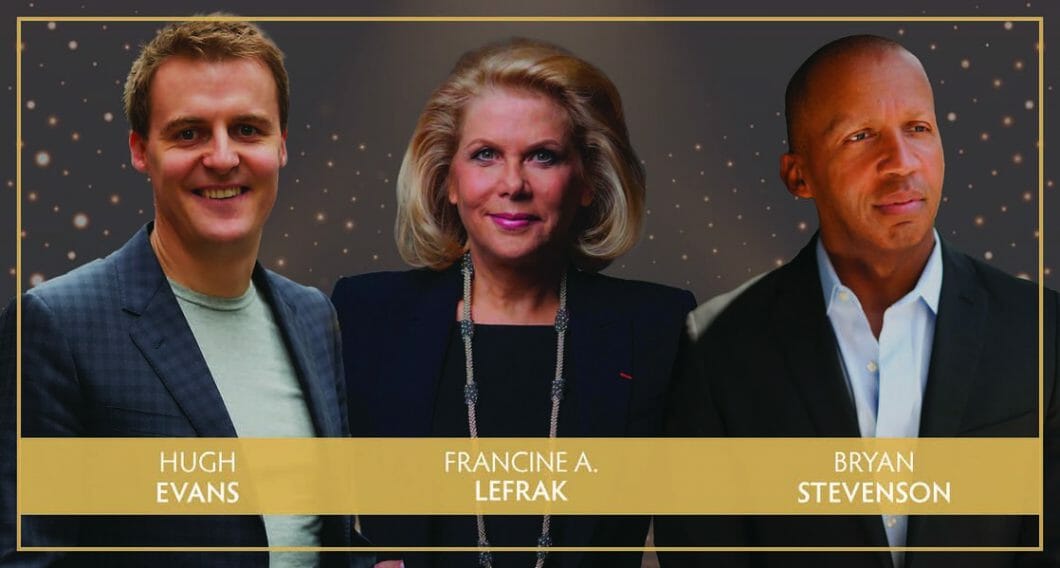 Former Presidents Jimmy Carter, Bill Clinton, George W. Bush and Barack Obama will once again serve as honorary co-chairs, with Barbara Bush, Jenna Bush Hager, Lauren Bush Lauren, Wendy Wear Stapleton and Victor and Patricia Ganzi serving as co-chairs for this year’s in-person event that will be livestreamed for a home audience. The celebration honors the legacy of President George H.W. Bush and the individuals who demonstrate the transformative power of service, and who are driving significant and sustained impact through their everyday actions.

“Over this past year, in the face of a global pandemic and calls for racial and social justice, we have seen a renewed energy for civic engagement as people around the world have responded to meet the most pressing needs of their community,” said Natalye Paquin, president & CEO of Points of Light. “We believe that everyone has the power to create change, and the dedication and impact of our honorees – Hugh Evans, Francine A. LeFrak and Bryan Stevenson – shines as inspiring examples of the progress we can all make towards achieving a more just and equitable society.”

About The George H.W. Bush Points of Light Awards Honorees

Hugh Evans is an internationally renowned development advocate, humanitarian and the co-founder and CEO of Global Citizen. In 2009, with grants from the United Nations, Australian government and British government, Hugh Built his impact in the aid and development sector, co-founding Global Citizen, an international advocacy organization committed to increasing the number and effectiveness of individuals taking action to end extreme poverty. In August 2012, Hugh launched the annual Global Citizen Festival – a free ticketed music event in New York City that coincides with the UN General Assembly meeting in September. Over the last ten years, Global Citizens have taken over 24 million actions in the fight against extreme poverty, driving financial commitments of $48 billion that have impacted the lives of 880 million people around the world.

“I am honored to accept this award on behalf of the millions of global citizens who have taken action to hold our world leaders accountable to the promises they’ve made to ending extreme poverty,” said Hugh Evans. “Thank you to Points of Light for this incredible recognition. By working together, we can create life-saving impact around the world.”

About Francine A. LeFrak

Francine A. LeFrak is president of the Francine A. LeFrak Foundation and the Same Sky Foundation Fund. A successful philanthropist, women’s rights advocate and social entrepreneur, ‍Francine founded a trade initiative, Same Sky, to help women who were invisible become visible through the dignity of work.

She began her employment and training programs with survivors of the Rwandan genocide and continued in the U.S. with women who were recently released from prison needing a second chance. As a philanthropist, she has helped thousands of women and girls use their talents to find opportunities for success and rise out of poverty. Her belief in a hand-up model is what sets her apart from others. By providing access to training, education and financial fluency programs Francine LeFrak is helping women be economically secure and flourish. She believes that introducing women to the tools they need for financial courage, enables them to face life’s challenges with strength and transform their lives with dignity. Through the Foundation’s numerous programs, Francine has impacted more than one million people.

Before her work as a social entrepreneur and philanthropist, Francine had a successful career on Broadway and as a social issues film producer where she garnered multiple Tony, Emmy and Peabody awards.

In recognition of her humanitarian efforts, Francine has received the Chevalier of the Legion of Honor from the French Government, the Women Together Award from the United Nations, the Ellis Island Medal of Honor, the Human Spirit Award from the Christopher and Dana Reeve Foundation, 2019 Women’s Entrepreneurship Day Accessories Pioneer Award and the UNFCU Foundation’s Women’s Empowerment Award.  Francine is a long-time member and Chair Emerita of Harvard Kennedy School’s Women’s Leadership Board.

“The late President Bush was an inspiration in the way he approached service and addressing societal issues through encouraging volunteerism,” said Francine A. LeFrak. “During his life, President Bush encouraged each of us to make a difference, and it is an honor to be considered one of our country’s points of light.”

Bryan Stevenson is the founder and executive director of the Equal Justice Initiative, a human rights organization in Montgomery, Alabama. Under his leadership, EJI has won major legal challenges eliminating excessive and unfair sentencing, exonerating innocent death row prisoners, confronting abuse of the incarcerated and the mentally ill, and aiding children prosecuted as adults. Mr. Stevenson has argued and won multiple cases at the United States Supreme Court, including a 2019 ruling protecting condemned prisoners who suffer from dementia and a landmark 2012 ruling that banned mandatory life-imprisonment-without-parole sentences for all children 17 or younger. Mr. Stevenson and his staff have won reversals, relief, or release from prison for over 135 wrongly condemned prisoners on death row and won relief for hundreds of others wrongly convicted or unfairly sentenced.

“I’m very honored to accept this award and recognition, which is a testament to the incredible work of our team at the Equal Justice Initiative,” said Bryan Stevenson. “We must all play a role in fighting for those who suffer inequality and injustice, and I hope to inspire others to act and meet the needs of the most vulnerable in their own communities around the world.”

In the coming months, Points of Light will announce additional honorees and event details including special guests and entertainment. For more information on The George H.W. Bush Points of Light Awards Celebration and to stay up-to-date on future developments, please visit www.pointsoflight.org/bushawardscelebration.

ABOUT POINTS OF LIGHT

Points of Light is a global nonprofit organization that inspires, equips and mobilizes millions of people to take action that changes the world. We envision a world in which every individual discovers the power to make a difference, creating healthy communities in vibrant, participatory societies. Through 177 affiliates across 38 countries, and in partnership with thousands of nonprofits and corporations, Points of Light engages 5 million volunteers in 16 million hours of service each year. We bring the power of people to bear where it’s needed most.

Get in touch for media-related inquiries