Eric Tanenblatt is the global chair of public policy and regulation at Dentons, the world’s largest law firm. He also leads the firm’s U.S. public policy practice, leveraging his three decades of experience at the very highest levels of the federal and state governments.

Eric, a renowned lecturer and political counselor who is widely regarded as one of the nation’s pre-eminent public policy thought leaders, has served in the administrations of the three U.S. presidents and as a senior advisor to a U.S. senator and governor, and held a U.S. Senate-confirmable post governing a federal agency.

He has a passion for shepherding disruptive companies and industries through the complicated web of law and regulation, and often writes and speaks about the innovation economy. He leads Dentons’ global autonomous vehicles team, and authors a popular weekly digest tracking the most consequential regulatory, political, and technical developments in the world of automotive autonomy.

Eric’s political and fundraising activities and experience are extensive. He served as chief of staff to Governor Sonny Perdue, Georgia’s first Republican governor in 130 years, and later helped coordinate the 2004 G-8 Economic Summit, hosted by President George W. Bush at Sea Island, Georgia. He served in 2012 as a political advisor and national finance co-chairman for the presidential campaign of Gov. Mitt Romney, with whom his relationship dates back to 2004, when he served as finance co-chair for the Romney-led Republican Governors Association. Earlier, in 2000, he served as the state chairman for President George W. Bush’s successful Georgia campaign and held senior positions in the 1996 Bob Dole and Phil Gramm presidential campaigns. He also served as a longtime advisor to the late U.S. Sen. Paul Coverdell (R-GA), including as vice chairman of the senator’s re-election bid in 1998. He also served in the administration of President George H.W. Bush at the Department of Health and Human Services as a special assistant to the secretary, and as director of intergovernmental affairs at the Peace Corps.

Eric is a prominent advocate for civic engagement, often writing and speaking on the subject. He was nominated by President George W. Bush and confirmed by the U.S. Senate to serve on the board of directors of the Corporation for National and Community Service, serving from 2008 until 2013. He was also the founder and chairman of Hands on Georgia, a statewide organization to promote volunteerism, and served as co-chair of the host committee for Points of Light’s annual conference in 2008 and 2018.

Routinely named one of Georgia’s 100 most influential persons by Georgia Trend magazine, which years earlier named him one of the state’s “40 under 40” rising stars, Eric is often quoted or cited by some of the most prestigious news and opinion services in the world, including the Wall Street Journal, The Washington Post, The New York Times, US News and World Report, National Journal, Politico, The Hill, Roll Call, the Associated Press, and The Atlanta Journal-Constitution. 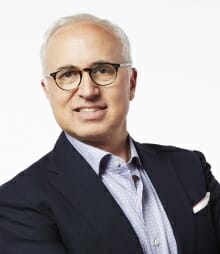