This post is by Mary Bruce and Ben Duda, co-executive directors of AmeriCorps Alums, the only national network that connects the nearly 1 million alumni of all AmeriCorps programs to the people, ideas, and resources that support their commitment to a lifetime of service.

Maya spent 1,700 hours serving her country with AmeriCorps. And now, she’s ready to launch a career that will change the world. Or, she’s out of luck, out of work and about to join the estimated 6.7 million “disconnected youth” who cost taxpayers an estimated $1.56 trillion dollars over their lifetimes.

Which will it be?

This past year, through AmeriCorps service, Maya was a mentor, teacher, coach, adviser and inspiration to Oakland middle schoolers. She’s an emerging leader in the neighborhood where she grew up and where she served. Through national service, she gained critical skills in teamwork, project management, facilitation and communication.  As her one-year term of service ends, will a potential employer or a college admissions officer actively recruit her because of her service – or will they wonder, “What’s AmeriCorps?” and, “How come Maya only lasted a year in her last role?”

Maya is not alone. Since 1994, nearly 1 million Americans have raised their hands through service with AmeriCorps. This spring, more than 5,200 alumni of AmeriCorps, from all 50 states, raised their voices. In a “Life after AmeriCorps” survey administered by AmeriCorps Alums, alumni told us that their civilian national service solidified their commitment to strengthening America. 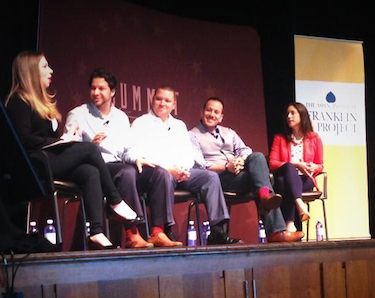 Nearly all alums (88 percent) believed their AmeriCorps service was among the most significant professional experiences of their life. They were confident that through national service they developed skills to be better students, employees and citizens. They shared with us that as young alums, they wanted careers that mattered.

Alumni of national service, like a veteran coming home or a returned Peace Corps volunteer arriving stateside, had challenges continuing their educations and moving from their service experiences into their next professional jobs. Only a third of alums strongly agreed they knew how to navigate “life after AmeriCorps” (for example, find a new job or get into a school of their choice).

Engaged citizens and civic leaders like Maya aren’t just nice to have. They’re critical to our country’s future. We are a nation where one in five children lives in poverty, high school dropout rates persist, and the rungs of the ladder to economic mobility are shaky at best. America’s challenges are real. Now more than ever, we need all Americans – and especially those who have proven themselves to be citizen leaders – to be asked to be part of the solution, and to be given opportunities to do so.

Too frequently, and for too long, the potential of AmeriCorps alumni has gone unrecognized, unrewarded and underleveraged. With the future of our country at stake, why would we leave this talent on the sidelines? Three steps we can take to fix this:

Maya, along with the nearly 1 million alumni of AmeriCorps who have served since 1994 have proven to be civic leaders, team builders and problem solvers with a “get-things-done” attitude. For the good of America, let’s work to ensure that all Americans have the common opportunity of being able to serve like Maya – and then let’s tap the potential of alums to grow as civic leaders, for life.

Let’s thank these alums, support them and count on them to keep getting things done for America. To help spread this message, today we joined more than 300 leaders at the Aspen Institute’s Summit at Gettysburg.

There, in a discussion with Chelsea Clinton (see photo above), we proudly shared that national service and the impact of our alumni network is necessary, not just nice. Maya wants to change the world – and America needs her. We’re asking you to join us in supporting her and her nearly 1 million alumni peers.