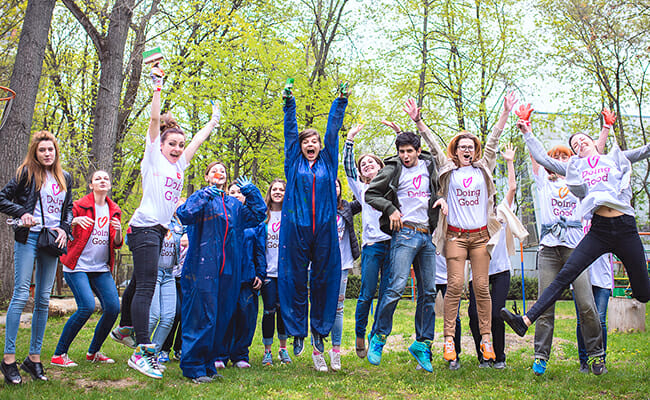 “Volunteering and community service is a lot like planting peonies. You may not see the results right away, indeed you may never see them, but you never know when you will plant a seed that one day will sprout and bloom forever.”
– Barbara Bush

Inspirational words from former First Lady Barbara Bush at Points of Light’s 2012 Conference on Volunteering and Service [watch the video]. This week, we join millions in celebrating the life of this iconic woman, who was a leader of and friend to the volunteering and service sector. And it is somehow fitting that her passing coincides with National Volunteer Week in the United States, as the country focuses on celebrating the millions of people who “plant peonies” every day.

Each year, we shine a light on the people and causes that inspire us to serve, recognizing and thanking volunteers who lend their time, talent and voice to make a difference in their communities. National Volunteer Week was established in the United States in 1974 and has grown exponentially each year, with thousands of volunteer projects and special events scheduled throughout the week.

The latest data shows that nearly 63 million Americans volunteer annually, giving almost 8 billion hours of time at an estimated $184 billion value. Utah ranks No. 1 in volunteering among states, while Minneapolis-St. Paul ranks No. 1 among large cities, and San Jose, California, ranks No. 1 for millennial volunteering. Not that it’s a competition, but you can see where your state ranks here! Additionally,  Independent Sector this week announced the new estimated value of volunteer time — $24.69 per hour  — helping to recognize the impact of those millions of volunteers.

You can see some of the 63 million stories of volunteers that have come to life this week by following #NVW and #ivolunteer. Twitter user @Kristaaamariexx shares “I love helping others and seeing the clients improve makes my day.” @VolInPinellas gave a special shout out to one particular volunteer, “Thank you to our Animal Services volunteer Monica Pugh. Monica contributed over 4,000 hours in the last 4 years.” And the Detroit Airport, @DTWeetin, is using National Volunteer Week to recognize 80 volunteers with President’s Volunteer Service Awards.

At Points of Light, we recognize volunteers five days a week with the Daily Point of Light Award. This week’s honorees exemplify the broad diversity of good deeds, consistent support, ongoing commitments of time and innovative solutions to persistent problems that play out in every corner of the country every day.

In Acton, Massachusetts, Barbara and Ira Smith, both age 86, have worked tirelessly for 28 years to ensure that veterans getting back on their feet, those emerging from homelessness or fleeing abuse, people living with illness or disability, people getting by on minimum wage and those who have experienced personal crisis such as a fire – have access to gently used furniture and household items, free of charge.

In San Francisco, Rana Abdelhamid, an internationally acclaimed human rights organizer, first-degree black belt and social entrepreneur, founded (IM)WISE, a nonprofit organization and global grassroots movement supporting Muslim women empowerment through self-defense and skills-based training. Rana started (IM)WISE after being the victim of a hate crime at age 16; now, seven years later, she was honored as one of the 2017 L’Oréal Paris Women of Worth.

In Arlington, Massachusetts, brothers Will and Matty Gladstone started The Blue Feet Foundation to sell blue socks to raise money for the blue footed bird after learning about this threatened species in the Galapagos. They have raised over $30,000 and sponsored a research project by a world expert in the blue-footed booby.

In Lincoln, Nebraska, after experiencing bullying firsthand, Ina Bhoopalam and a group of friends wrote a curriculum for grade school and middle school programs that address bullying, gender issues, and focuses on building confidence. Last fall, she and 20 teenage volunteers from Lincoln School District hosted a “Like A Girl —Empowerment Boot Camp” for 50 at-risk elementary and middle school girls living in one of the toughest neighborhoods in the cornhusker state. Their project was recognized as an award winner of Make A Difference Day 2017.

The seeds being planted by these individual points of light have already begun to sprout and will no doubt bloom forever. Their stories – and all the stories shared during National Volunteer Week – demonstrate the power of volunteerism brings us together to tackle society’s tough challenges, spark change, and build stronger, more resilient communities.

National Volunteer Week is coming to an end, but there is still time to get involved: