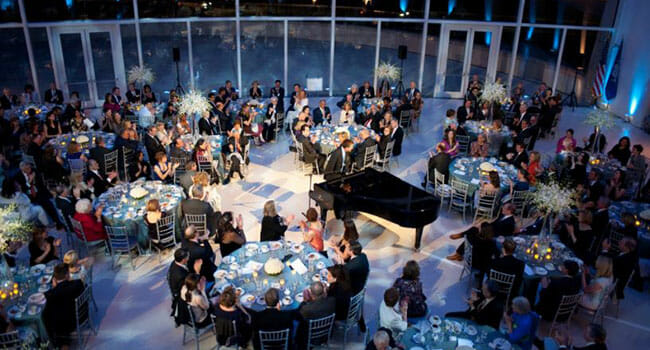 “Any definition of a successful life must include service to others.”
– President George H. W. Bush

From the White House more than 25 years ago, President George H. W. Bush gave voice and direction to a movement that’s steadily grown ever since — changing countless lives in communities across the country and around the world. No president in American history has advanced with greater clarity and consistency this belief: that voluntary action to help others is inseparable from human freedom and America’s pursuit of what is right and good.

Each year, Points of Light honors individuals who embody the vision of “a thousand points of light” that President Bush first invoked during his acceptance speech at the 1988 Republican National Convention. Their extraordinary contributions to volunteering and service have made their communities, and the world, a better place.

The 2017 Points of Light Tribute Awards will be held on Thursday, Oct. 19, at the Embassy of France in Washington, D.C. CNN anchor Wolf Blitzer will serve as master of ceremonies for the event, where 300 corporate, nonprofit, and community leaders will gather to recognize and celebrate the power of the individual to spark change and improve the world.

“Strength, resilience and kindness flow from simple acts of service,” said Natalye Paquin, CEO of Points of Light. “The individuals honored tonight are shining examples of what it means to be a point of light. They represent the great humanitarian spirit that binds us together.”

This year’s honorees are:

“Points of Light continues to lift up one of the legacies that is most important to my dad, and one that continues to have enormous ripples and impact in communities around the world,” said Neil Bush, chairman of Points of Light’s board of directors and son of President George H. W. Bush. “These extraordinary individuals bring leadership, innovation, and energy to bear on some of the toughest challenges we face as a nation. It is our privilege to recognize them.”

The 2017 Tribute Award honorees are representative of the more than 62 million Americans who volunteer their time, talent and resources every year in service to others. The value and impact of volunteering is particularly relevant today, on the heels of numerous natural disasters, including three catastrophic hurricanes. In the coming weeks, months and years, the people of Houston, the Gulf Coast region, Florida, Virgin Islands and Puerto Rico will continue to recover and rebuild from the devastation caused by these storms – and these efforts will be most effective and successful with the ongoing support of volunteers.

This weekend, in recognition of the critical role volunteers play in disaster relief and recovery, Points of Light will present Daily Point of Light Awards to five volunteers who performed outstanding work in the aftermath of Hurricanes Harvey, Irma and Maria. The volunteers will be recognized on Oct. 21 during the “Deep From the Heart: The One America Appeal” concert benefitting communities hit by recent natural disasters; they will receive their awards from Points of Light Chairman Neil Bush and be recognized on stage with the five living former U.S. presidents, including Barack Obama, George W. Bush, Bill Clinton, George H.W. Bush and Jimmy Carter.

Do you know a volunteer who is lighting the way for good, creating meaningful change in their community, or taking action that improves the world? Nominate them for a Daily Point of Light Award.