This post is by Pam Hayes, a third grade teacher at Walkerton Elementary School in Walkerton, Indiana. 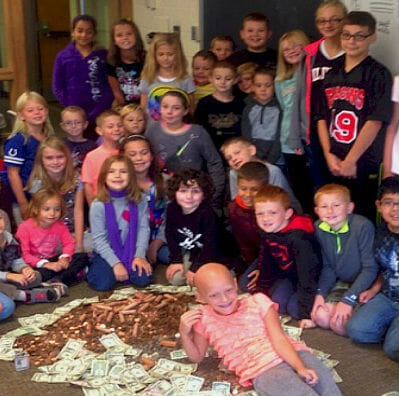 When I was a young girl, I remember meeting a woman at my church who walked with a severe limp.  After speaking with her one morning, I turned to my mom and asked, "Why is it so hard for her to walk?"

She replied quietly, and with a heavy heart, "She had polio, sweetie. Walking will always be difficult for her." As I watched her painfully walk away, I remember thinking, "What's polio?"

At the beginning of this school year, I was sharing this story with my third graders. We were discussing the difference between my vast vocabulary and the words they have learned in their eight short years on earth. The intent was to teach them about words and their meanings. Semantics.

The lesson brought so much more. My students reacted emotionally. "So, polio is kinda like cancer, Mrs. Hayes?" asked one of my boys. A conversation about the definition of cancer, its effects on people and the many ways it has invaded each one of their hearts followed. I was flabbergasted. Is cancer that prevalent?

One of the many wonderful qualities of a child is his ability to see the world's problems as easily fixable. Cancer, to them, could be eradicated if "a really smart scientist makes a medicine to cure it." This naive, genuinely honest, simple approach is what led to a fundraising effort to help children in a local hospital.

Last September, students at Walkerton Elementary School came together to raise money for the Memorial Hospital Children's Oncology Department. Several resources were utilized to immerse the children in cancer education.

There were statistics shared, guest speakers invited and mini-lessons prepared for a weeklong initiative to raise awareness and funds. The results were astounding! The goal for the week: $500. It was surpassed on Tuesday. Children were bringing their piggy banks, birthday money and quarters from the Tooth Fairy to help children afflicted with cancer.

They were emotionally invested. Why? They felt that a child with cancer didn't have a childhood. They wanted those kids to be kids.

Their efforts culminated on Friday with a grand total of $2,051.69. One week. In five days, these children felt the triumph of helping others. They were educated about a devastating topic, inspired to find a way to assist those in need and worked hard to provide funding that will help solve the problem.

The efforts of these students, both individually and collectively, are commendable. Through serving others, they were able to see the gift of wellness.

As I think about those ill children who are courageously fighting cancer, I am reminded of the woman from my childhood. Thanks to medical breakthroughs and effective research, we are no longer threatened with an epidemic of polio.

Wouldn't it be wonderful if, one day in the near future, a child who hears the word cancer could look up to her mother and ask, "What's that?" With a smile and a joyous heart, she will reply," Something we no longer need to worry about, sweetie."

Are you a teacher looking to teach your students about volunteer service? Check out resources and lesson plans from generationOn, Points of Light’s youth division. (This post originally appeared on the generationOn blog.)