Read about how folks on Long Island, N.Y., are preparing for disaster. To help your family take action, visit Good & Ready, where you’ll learn how to create a disaster plan, build a preparedness kit and more. 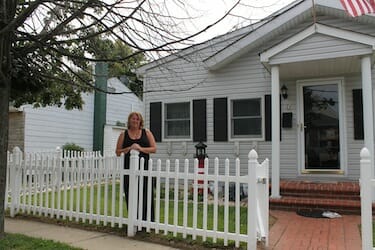 For her 50th birthday in 2012, Colleen Popp and her best friend headed to New Orleans to celebrate. She remembers being shocked by the lasting effects of the devastation caused by Hurricane Katrina in 2005.

“Everything was either new construction, still in disrepair or just desolate,” she said. “I just remember us looking at each other and thinking, could you imagine?”

Six weeks later – while sitting in the living room of her East Rockaway, N.Y., home watching Hurricane Sandy blow into town, water rushed in – sending her, her husband and two grown kids scurrying to the second story of their home.

It only took a few hours for the storm to destroy the first floor.

The Popps thought they were prepared – they had moved their cars to higher ground, had flashlights, candles, food and water on hand, and moved most of their electronics up to their second floor. 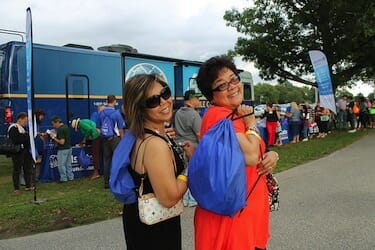 “I thought we were just going to get it on the floor, I didn't think to empty out the cabinets or counters,” she said.

According to Jan Epstein, senior manager of the Allstate Foundation, the Popps are not alone. "Only 15 percent of Americans are prepared for a disaster, which means that 85 percent are not," Epstein said.

The Allstate Foundation and Points of Light hope to change that. This summer, they launched a 14-city disaster preparedness tour to help people take action. Last Saturday, the tour came to Long Island at Eisenhower Park, taking place before a free KC and the Sunshine Band concert.

"We want to give people the tools they need to take care of themselves and their families," Epstein said.

Hundreds of Long Islanders lined up to create more than 750 free disaster preparedness kits. The kits include flashlights that don’t need batteries, dust masks, ponchos, first-aid kits and whistles. Volunteers from Allstate and the Long Island Volunteer Center, part of Points of Light’s HandsOn Network, provided tips and advice as they gave out the items.

The event was just what friends Elizabeth Gosioco, Lidia Fajardo and Marilyn Jara – who are admittedly part of the unprepared 85 percent – needed.

With the recent storms hitting Long Island – Hurricane Sandy in 2012 and even the recent heavy rains that flooded many parts of the island just two weeks ago – they know that complacency is not an option.

“It happens so unexpectedly,” Gosioco said, shaking her head. She said she worries about what she would lose if her neighborhood flooded, her basement filled with 30 years of memories.

Diana O’Neill, executive director of the Long Island Volunteer Center, said she hopes that the event helps people realize that being prepared can offer some semblance of control at a time when many feel powerless.

“It’s up to us to be responsible for our preparedness, our response and the recovery,” she said.

Mary Halcott of Hicksville, N.Y., said that after Sandy, she faced extra challenges in caring for her elderly mother. “I came because I wanted to see if there was anything new to learn,” she said, adding she now knows how much water she should have on hand – one gallon per person for at least three days.

While the kits provide many items needed during a storm, Allstate agent Christina Shaw said it is only a start.

“Every family needs to really sit and think about their own personal needs – including medicine, how much water they may need – and really make it their own,” she said.

Shaw knows firsthand how devastating a disaster can be. She was six months pregnant with her daughter when five feet of water barreled into her home in Long Beach during Sandy. Her Allstate office was also without power, so she set up shop behind a Starbucks to help her customers file claims.

“Even if you weren’t directly affected or hit, almost everyone knew someone who was,” Shaw said. “We need to be prepared – especially because right now we are in the height of hurricane season.”

As for Colleen Popp and her family, it took them a year to renovate their home. Their neighborhood is still struggling to recover. Walking the quiet streets, many houses are still under construction, some have been leveled and others are still vacant.