Throughout human history, underlying the sweeping reforms and essential institutional responses to disaster, to poverty, to environmental degradation, and to all forms of need has been the one reliable but often unheralded individual volunteer. The Red Cross worker, the soup kitchen cook, the foster grandparent, the patient tutor who turns a child’s life around.

In the past 20 years, we have seen a rekindling of the unique brand of American voluntary action. The spark for this modern-day service movement was President George H. W. Bush who noted in his 1989 inaugural address that, even in times of scarcity, we have one resource that always grows, “the goodness and courage of the American people.” 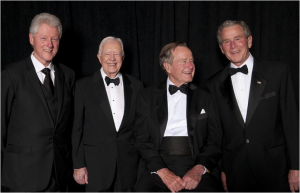 To honor his vision, Points of Light hosted “All Together Now: A Celebration of Service” one year ago – March 21, 2011 – at the Kennedy Center in Washington, D.C. This star-studded event brought together four former presidents, leaders from across the service sector and those working to make change in communities around the globe. The more than 2,000 in the Kennedy Center audience and millions that watched in primetime on NBC were moved by the stories of inspiration and left with a renewed sense of purpose and energy for their own capacity to make a difference.

Since that event, Points of Light has leveraged the incredible support provided through the $30 million Service Generation Campaign to power innovation and help inspire, equip and mobilize our networks, including the next generation of volunteers, as well as strengthening our financial sustainability. This has included the expansion of our generationOn Clubs to engage young volunteers, innovation in our technology assets, launch of our Good & Ready emergency preparedness campaign and enhancements to our Corporate Institute to help companies tap into their employees’ power to create change.

At his inauguration, President Bush called for “a new engagement in the lives of others, a new activism, hands-on and involved… a thousand points of light.” Just 30 years prior, another newly inaugurated president stood on those same U.S. Capitol steps and beckoned us to see our citizenship as an invitation to serve, rather than a license to consume. Both John F. Kennedy and George H. W. Bush knew that the great executive, judicial and legislative triumvirate of our constitutional system would preserve and nourish our democracy but that it would be the enlightened and inspired citizen volunteer who would hold the key to its domestic and international promise. 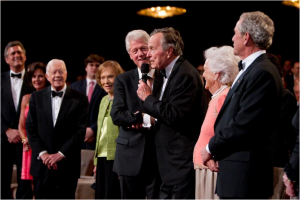 Following his 1989 speech, President Bush established what has now become Points of Light, an organization whose mission is to inspire, equip and mobilize people to take action that changes the world. President Bush also signed the National and Community Service Act in 1990, building a new threshold of presidential leadership that has been continued by each successive administration.

From 1989 to 2010, the number of individuals volunteering annually grew by 25 million. Young people, in particular, have stepped forward in dramatic numbers to serve. Indeed, community engagement has become a natural pathway for young Americans who weave academic and athletic achievement with outreach to their communities and who are knocking at the doors of Teach For America and City Year in droves.

Since President Bush invoked a thousand points of light, we have seen a profound shift in power. We have witnessed what author John Cooper Ramos has called the “super-empowered” citizen, evidenced by the contagion of democratic impulses in regions thought impervious to political freedom, in the proliferation of civil society organizations and in political movements fueled by social media. According to Cooper Ramos, the future will be written by these super-empowered citizens: the pace of change continues to accelerate, the tools for self-organizing continue to strengthen, and the powers of individuals to make choices and act continue to grow.

More than 20 years ago, President Bush looked out from the Capitol steps and saw, across the country, individual points of light, lights that are inextricably tied to the beacon in New York harbor. For in that “imprisoned lightening,” as Emma Lazarus described it, is the yearning to be free from oppression and free from want, to be a part of a better world.

Now, we must re purpose our commitment to service and provide avenues for dialogue and action that ensure that our own democracy is inclusive, compassionate and vibrant. More than any other factor, our citizenry will determine our nation’s destiny.

At Points of Light we are invested in actively providing new ways for individuals to exercise all of their assets – time, talent, money and voice – in meeting the challenges of our time. Whether you join us online, through an existing project or you create your own; you’re a corporate partner, leveraging the time and talent of your employee; a social entrepreneur launching an exciting new venture; or a nonprofit actively engaging volunteers in delivering on your mission – we thank you for all that you do and hope you will continue to help us realize the power of President Bush’s vision.