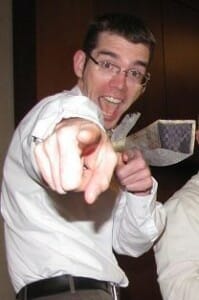 Visit the Americorps Alums blog and the HandsOn Network blog to read other versions of Michael’s story how AmeriCorps Works and has influenced his life.

Five years ago, the only thing I knew about volunteering came from papers published in academic journals. I was an ivory tower academic studying social networks and people’s perceptions of volunteering.

When I left grad school it was tough finding a job. I heard about AmeriCorps and figured it would be a great way to learn more about how volunteering actually works for when I would be in my PhD program.

My interview with Volunteer Maryland was terrifying, but that was nothing compared to how I felt after two weeks of training. This group of people were dedicated to the causes they worked with and passionate about the power of volunteering to change communities.

As if the interview and training process wasn’t frightening enough, my first day serving at the Maryland Department of the Environment was even scarier. I met the Secretary of the Environment who was an alumna of the program that I was serving in, and found out the only resources they had to support their idea was a volunteer waiver form.

No big deal, right? Build a volunteer program from nothing, compare yourself to dedicated and passionate people, and have a cabinet-level politician be invested in the work that you’re doing? No problem.

I took a little bit of time to freak out and then got to work. After a few months, there was a fairly strong program that used a small group of volunteers to manage large amounts of information efficiently. So, I decided to take a week out of the office to test if my program could run on its own and help a fellow AmeriCorps member with a project they were working on. 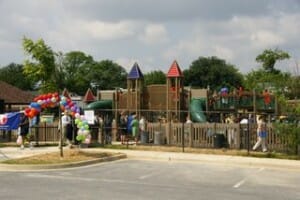 I spent a week working with 2,000 other people to rebuild a community playground that had been destroyed by arson. I thought I was going to swing a hammer for a week, but I got assigned to work in a tool shed.

I thought it was going to be boring. It turns out it was one of the best jobs on the site.

You see, everyone who showed up needed to come by the tool shed for something, so I ended up talking to just about everyone who showed up. I got to hear their stories about why volunteering is important to them and hear why they came back to rebuild the playground they’d originally worked on. It was a great experience getting to know complete strangers who were working for some idea of what is good—of how their world ought to be rather than simply accepting how their world was.

I volunteered for five days in a row. On the sixth day, I got a lot of phone calls asking me how to do things or how to fix some of the power tools. It was the first time that I realized that I was valued not just as a volunteer, but as a volunteer with a specific skill set that was beneficial to the project I was working on.

The people I worked with changed how I thought about community.

Before I worked on the playground, I thought your community was just the place you lived. I learned that community is the place that you care about, and that you care about making better. I learned that volunteers are valuable, not only for the work that they do, but for all of the skills that they bring with them to an organization. It’s something that I always knew, but finally began to really understand.

Working on the project made me realize that I wanted to keep working with volunteers. It was my turning point that made me realize how volunteers were a powerful force in their communities, and a big part of why I signed up for a second year in AmeriCorps with Volunteer Maryland, and why I’m still supporting the work that volunteers do across the country.