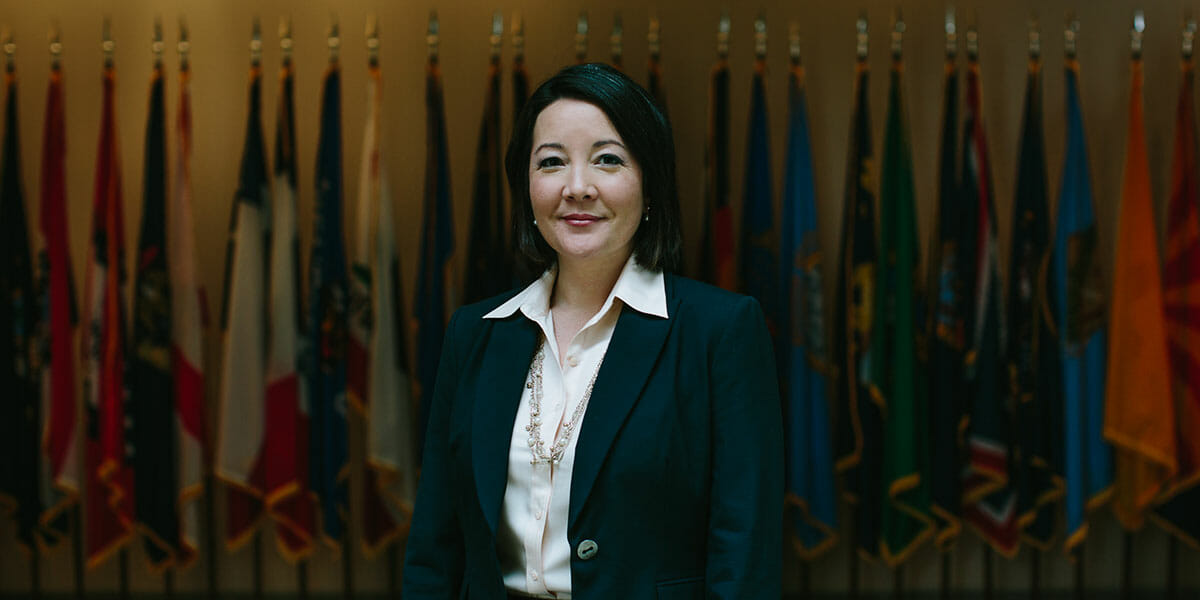 Genevieve Chase founded American Women Veterans to connect women veterans with the resources necessary to make the transition from military to civilian life.

Meet Daily Point of Light Award honoree Genevieve Chase, who was a Top 10 finalist for the L’Oréal Paris Women of Worth Award in 2018. Each year L’Oréal Paris and Points of Light recognize and celebrate Women of Worth who make a beautiful difference in their communities. Ten honorees each receive a $10,000 grant to support their most cherished cause, and an online vote determines one honoree who will receive an additional $25,000 grant. Nominations for 2019 are now open! If you know a woman who works to create lasting and significant change in her community, nominate her to be one of the 2019 Women of Worth.

“Transitioning from combat to civilian life can be difficult, and it’s even more difficult for veterans whose contributions are ignored, as women’s often are,” said Genevieve Chase. “I want raise the profile of the woman veteran – to give her a platform to share her stories and a way to connect with others like her, to ensure that she gets the benefits she earned, and to inspire her to continue her service out of uniform.”

Picture this: You’re a woman who was injured in battle in Afghanistan. Now you’re back home, and every time you go to the veteran’s affairs hospital, the staff assumes you’re there for your husband. When you’re up for a big promotion at work, and you lose out to a man who has experience in a field it was illegal for you to work in despite having more qualifications than him. That sort of treatment is what prompted Genevieve Chase to start American Women Veterans.

“We want to change the profile of what people think when they hear the word ‘Veteran,’” said Genevieve. “Being seen is shockingly undervalued but so incredibly important.”

Following 9/11, Genevieve left a successful real estate career to join the Army as an intelligence agent working to thwart attacks against military personnel. She spent 2006 in Afghanistan, and when she came home, she fought to conceal her brain injury, developed PTSD and became deeply depressed. She tried to fight her suicidal urges by getting involved with veterans’ groups, but she felt her contributions were minimized because she was a woman.

At the end of 2008, Genevieve invited a group of female veterans to a cafe in New York City. Hearing their experiences led to the creation of American Women Veterans, and founding the organization saved Genevieve’s life. “It gave me a purpose; it made me feel like I had a right to live,” she said.

American Women Veterans started as a Facebook page, with a primary focus on raising awareness of women’s contributions to the military and giving female veterans a place to connect and share their stories. Its secondary focus was advocacy. Genevieve and her organization worked to repeal “don’t ask, don’t tell,” lift the policy excluding women from combat and improve treatment of women veterans at VA hospitals.

As part of that work, Genevieve testified before the Senate Veterans Affairs Committee and the Senate Foreign Relations Committee. She also organized letter-writing campaigns, gave speeches and advocated her positions to congressional representatives. While working on the combat exclusion issue, she helped draft legislation. Due to her efforts, and those of others, women – who make up about 15 percent of military personnel – can now receive the same training and promotion potential as men for work they have already been doing.

American Women Veterans continues to focus on raising the profile of female soldiers and veterans. It also connects women veterans with the resources necessary to make the transition from military to civilian life. The organization’s Facebook page has become a one-stop source for information about scholarships, job opportunities, benefits updates, events and more. Genevieve said that because of her organization’s reach, military branches and service providers often get in touch with her directly when they want to get the word out about something.

Today, American Women Veterans is a small organization with a roster of about 30 active volunteers and only a few partners: the law firm Orrick, Herrington, & Sutcliffe; private donors and in 2017, REI; and ally Army Women’s Foundation. What Genevieve is trying to do with the organization is build community. Her digital community is up and running, with more than 109,000 Facebook followers, many of whom are quick to comment on posts and share personal stories.

Genevieve believes the next step is to create local chapters of the organization so that women can connect face-to-face with other female veterans in their area. “I want to help them build community where they are,” Genevieve said.

In the military, personnel assigned to a new area are given a sponsor – someone who has been there a while who can tell newcomers what to expect and where to go to get their needs met. Genevieve would like to see her organization function in the same way. “There are a lot of resources out there, but they’re not all effective,” added Genevieve. “Sponsors can point people to the valuable ones.”

Allison Adkins first met Genevieve in basic training and has been involved with the organization since its early days. A 14-year soldier who is also a lesbian, Allison was particularly appreciative of American Women Veterans’ efforts to repeal “don’t ask, don’t tell.”

“It was very hard for me; I wanted to be out and be happy and to let people know that this is who I am while also serving my country,” Allison said. “ [American Women Veterans] kept me up-to-date on what they were doing and sent me messages saying, ‘Don’t give up.’”

When Allison was assigned to Colorado and found herself confronted with discrimination, the organization helped connect her with local groups – a rock-climbing club and a sewing group – so she could build a friend network. When Allison felt suicidal in 2015, Genevieve found her a therapist and life coach who helped her work through her emotions.

As someone whose military contributions have often been overlooked, Allison is also grateful for Genevieve’s efforts to raise the profile of female soldiers. “People forget that women serve in the military,” said Allison. “They just don’t get a lot of recognition, and American Women Veterans is trying to change that.”

Early in her first deployment to Afghanistan, a car carrying an improvised explosive device plowed into the truck in which Genevieve was riding. She and her fellow soldiers suffered external wounds and traumatic brain injuries.

Genevieve is still living with the after-effects of the brain injury, but hasn’t let that stop her from trying to make life better for the nation’s two million female veterans. She works without a salary to keep the organization afloat and continues to serve as a 1SG in the Army Reserve.