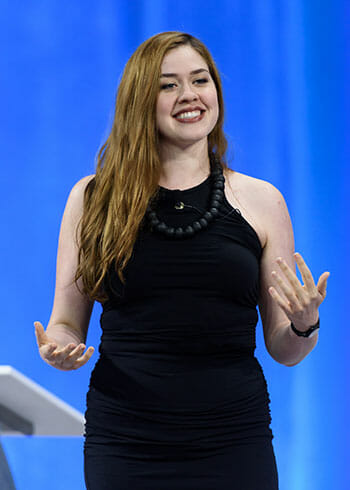 Veronika Scott, founder of The Empowerment Plan, has built an organization that began around a single idea: to design a coat specifically for the homeless. The coat is self- heated, waterproof, and transforms into a sleeping bag at night. That idea has now evolved into a system of empowerment in which homeless women are paid to learn how to produce coats for people living on the streets, giving them an opportunity to earn money, find a place to live, and gain back their independence.

Veronika is the youngest recipient of the JFK New Frontier Award from Harvard University. She has also received an IDEA Gold Award from the Industrial Design Society of America, has been named one of the 2015 Forbes 30 under 30 Social Entrepreneurs, as well as the regional Emerging Entrepreneur of the Year. The Empowerment Plan story has been told all over the world and shared at events such as the Forbes 400 Philanthropy Summit.