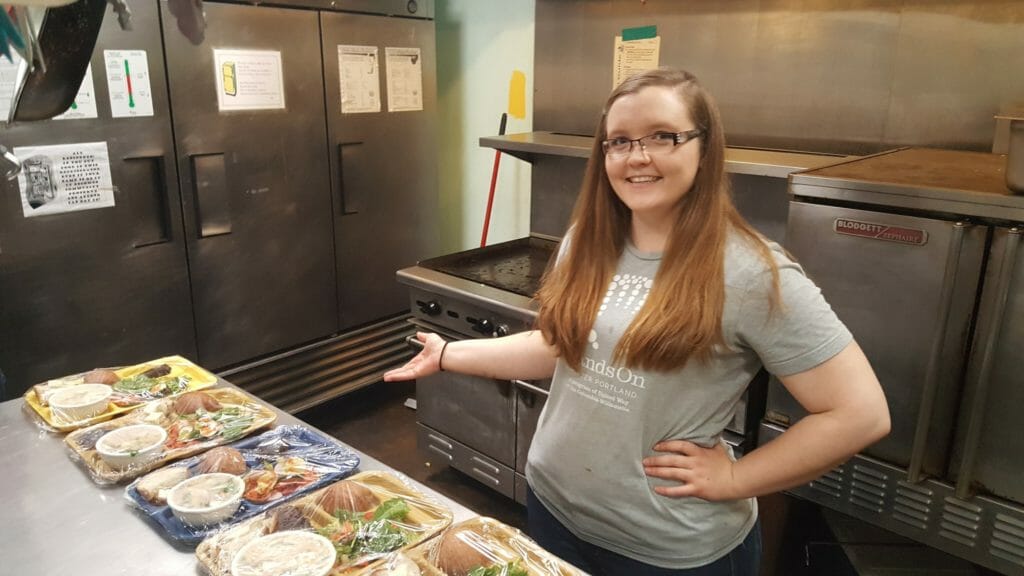 I’ve made the spreadsheet with basically with recipes that I’ve looked up and scaled up to serve 80 people,[which] is what I usually shoot for, just in case. The meal service is important because it’s a pretty limited shelter in terms of storage space, so the residents don’t really cook their own food or have their own food on site. So, if there’s no meal providers coming in, then there’s no dinner served and it’s kind of like a “fend for yourself” kind of deal.

Everybody is super appreciative when we come in and serve dinner, and I always focus on having a fresh, healthy meal. Everybody just enjoys it! And we get a lot of compliments on our meals. 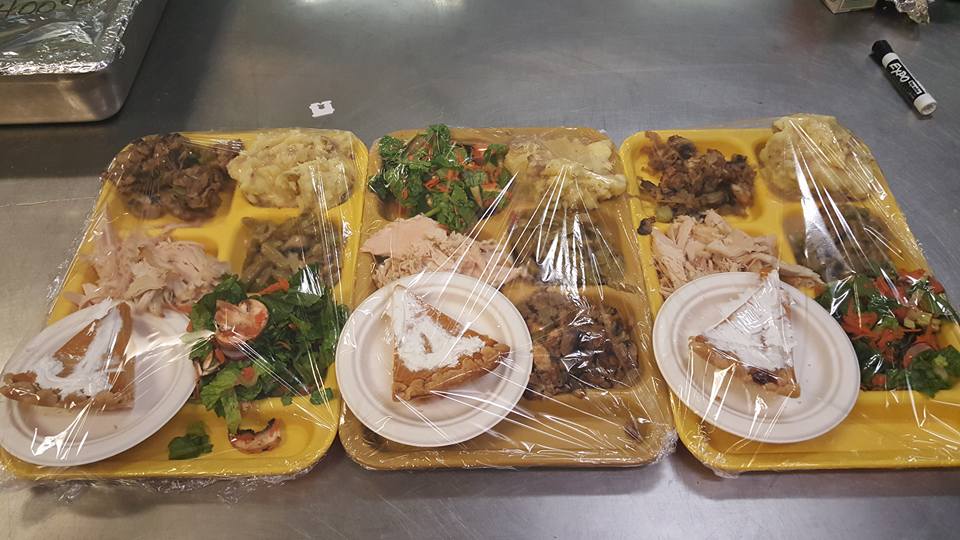 So, the volunteers each buy and bring the ingredients for recipes. That’s why you try to keep it under $12 — so that it’s affordable for the volunteers, right?
Yes, I have it broken down per person. But it’s not required. If someone wants to volunteer but has a financial hardship, they are still more than welcome to volunteer. They just need to let us know that they are not able to contribute, and that’s fine. Usually it’s no problem, if everyone shows up. That’s the important thing about this project. It’s kind of relying on the commitment of the volunteers, so that’s really important for it to succeed.

The Clark Center has a pantry that has donations from the Oregon Food Bank, but it’s just a lot of canned stuff…and I try to serve healthier meals with whole grains and fresh meat and fresh vegetables and a lot of nutritional food because I think that’s important.
We have a lot of volunteers who are regulars now, who sign up pretty regularly each month. That is really important to me because if a volunteer doesn’t show up and bring the ingredients that they are assigned, that can be a little bit catastrophic to the recipe. Having these volunteers that have basically committed to coming back over and over and over because they enjoy the project – that’s been really great. I’ve made some really good friends through this project, and seeing people come back because they are having a really great time cooking is really rewarding as a volunteer leader.
You said you cook on site – is there a big enough kitchen at the Clark Center?
They have a commercial kitchen, I mean it’s a small commercial kitchen, and it’s pretty outdated but it works. We make it work!
Where do you find your recipes?
Most of them are recipes that I’ve looked up, just by googling. I do a lot of casseroles because they are easy to make large portions. So, they are just recipes that I’ve looked up that were pretty simple and pretty cost effective and then I just scaled them up serving-wise, to do about 80 or 90 servings. And I just have that all broken down, and cost wise I have it priced out based on the local grocery store prices, so my volunteers are prepared. It’s been a lot of planning that went into it, but I’ve been doing it as I’ve been going along for the past year, so now I have a pretty good database of recipes to pull from.

How often are there meal providers at the Clark Center?
I think it depends on the time of year. Around the holiday season, they are booked up pretty much. Like right now I had a hard time getting a date in for my church because my church wanted to do a project there. So, around the holiday season, I would say it’s almost every night or at least 5 out of 7 nights a week. But during September, and like summer, it’ a little harder to get volunteers in. In those months, there’s maybe three nights a week when there’s a group coming in on average.

Can you share more about the reaction of the people you are cooking for when you and your volunteers come in?
Sometimes people come up and say this is the only meal they’ve had all day, which is pretty crazy to think about. And that’s why I try to focus on healthy meals and provide enough food for everybody. I can tell you about some of the meals that we’ve done in the past. We’ve done chicken teriyaki, and I like to be very budget conscious, so I tend to my make my own sauces and dressings for everything. So, we made our own teriyaki sauce, and a few people came up and said this is restaurant quality and that was a great compliment for me! I get that sometimes. And also something I do regularly – I like to make fresh baked cookies on site because I think that’s a good gesture and I know the guys there don’t really get a lot of fresh baked goods. And I like to bake! And so we make fresh cookies almost every time, and I’ve had people come up and say that the peanut butter cookies are like the best peanut butter cookies they’ve ever had! It’s nice to hear that kind of feedback on our meals, and everybody pretty much knows me by name now. It’s been really great to build relationships with the people there. 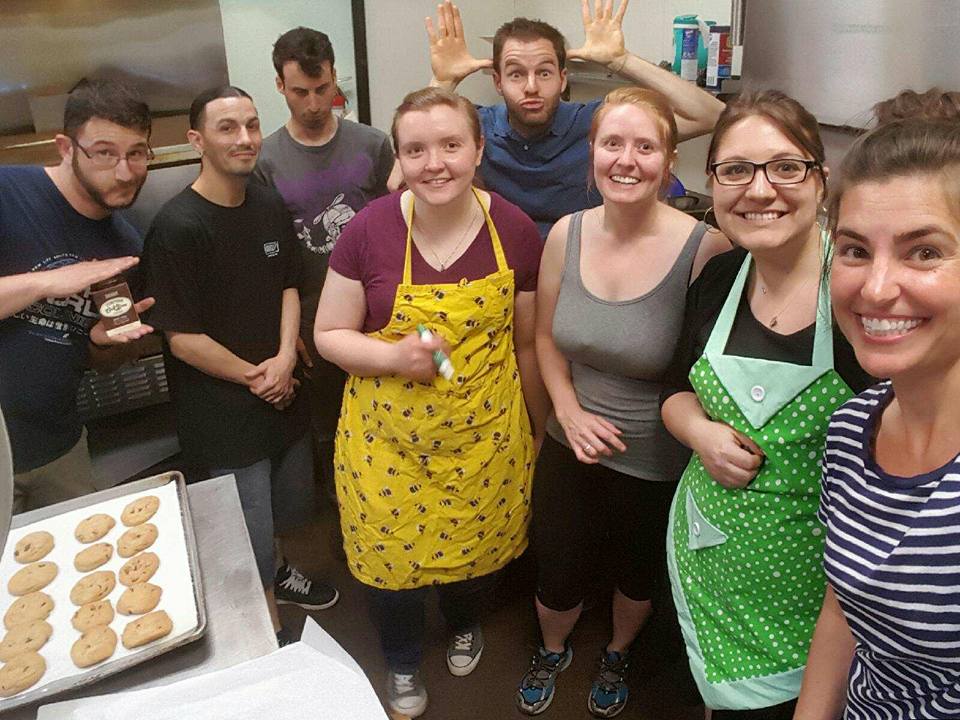 What do you hope that someone reading your story of service will learn from this?
I would like people to take away that a small gesture can make a really big impact on somebody’s day, or even their week or their month. Because I’ve had so many people express extreme gratitude over us coming in and cooking and serving a meal which is something pretty trivial to most people. Most people know where their next meal is coming from. But in this situation, these people have been homeless for who knows how long, you know, and they don’t always know where their next meal is coming from. So, I think the fact that they know they are going to be getting a healthy meal and it’s coming from people who genuinely care and want to give back to the community – I think it really does make an impact. It shows that people care. That’s important to me. I don’t care about the cost or anything like that. I think it works really well with a team of people who each contribute a little bit to make a giant meal for a ton of people. So, I just do it for that reason – because I want to make an impact on somebody.
Kristin uses her passion for cooking to make an impact in her community. For ideas on ways to serve and how to put your skills and passions to good use, check out the Points of Light blog.