On the long ride between Phoenix and her home in Trabuca Canyon, California, Terry Corwin hatched a plan.  It was the summer of 2004 and she had her two sons in the car, Spencer, who was going into seventh grade and Garrett, who was starting fourth.

“I started thinking that I was about Spencer’s age when I got involved in community service,” Corwin recalls. “And I wanted that for my boys too.”  Her captive audience wasn’t too sure what their mom had in mind, but if they could do community projects with their friends involved, that would be ok. 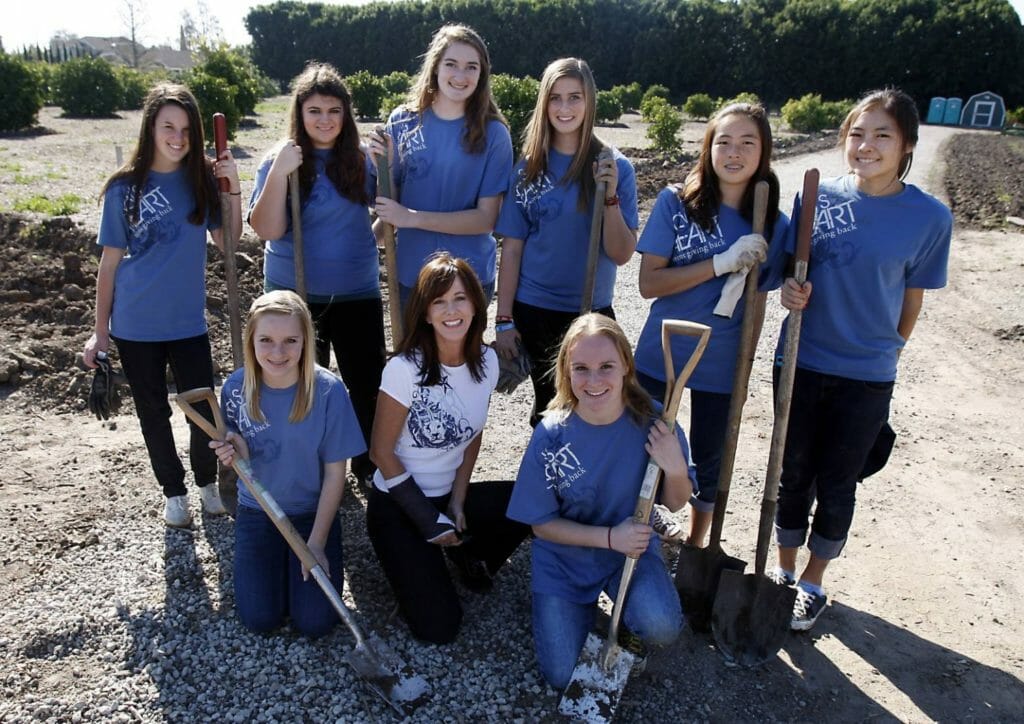 Corwin, bottom row center, and a group of young ladies ready to clean up the neighborhood.

But when she started looking into what kind of opportunities was available for her boys to give back locally, Corwin came up short.  “There was Boy Scouts, a great organization but more of a commitment than we could handle with sports and academic commitments. There were plenty of options for girls, but not boys.”

Being the kind of person who doesn’t sit back and wait for things to happen, Corwin started her own non-profit, Lion’s Heart, designed to give boys and young men options for connecting with people in their local community who need help.  “We started small,” she recalls.  Groups of three to 30 boys from the same grade, each with a parent coordinator, would meet and decide how to use their time.  The boys would agree to donate a minimum of 30 hours a year to service.

“They elected officers and ran their meetings – I wanted it to also give them tools they could use in college, in their life,” she said.  There was no fund raising involved – the boys just gave of themselves and of their time. Each group would pick a project, a person, a neighborhood and make it happen, from mowing a lawn for a disabled neighbor or picking up trash at a local park to playing with kids at a homeless shelter.

Lion’s Heart has come a long way since 2004.  Now a digital platform for volunteer teens all over the country, Lion’s Heart is a national co­-ed organization with members that have served more than 390,000 hours of volunteer service to a variety of causes and organizations. Active membership includes some 2400 teens in 53 chapters across 10 states and is rapidly growing.

“We want these kids to become leaders,” she says.  “I wanted my own boys to be aware that everyone isn’t as fortunate as they are, to see the world as bigger than where they are living right now.  And that they could make a difference. Lion’s Heart grew from there and I’m so proud of that.”