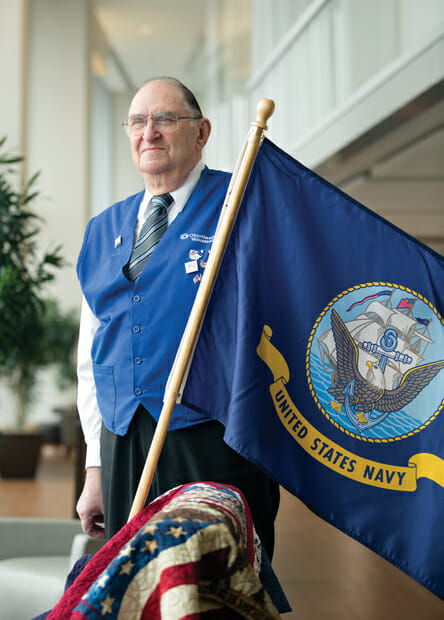 The first thing you’ll notice upon arriving at OhioHealth Riverside Methodist Hospital in Columbus, Ohio are the little American flag magnets stuck on various doors of patients around the building, indicating there are veterans in residence. If you really listen, you’ll likely hear the hearty laughter of a patient inside his or her room, enraptured in a nice conversation with volunteer Bill Mirick.

William “Bill” Mirick, 85, has been part of Riverside’s Veteran Visitation program for four years now and is a veteran himself. After serving in the Navy in the Korean War for nearly two and a half years, he understands what it means to be a veteran, which spurred his interest in helping others with similar backgrounds.

Bill proposed an idea for having a magnet on  patients’ doors, so everyone walking by would know that there was a veteran in that room. For two years, Bill and other veteran volunteers made the magnets until the hospital offered to help them out.

“The most important thing to any veteran is the American flag,” said Bill. “So we present them with [that].”

The flag and the stalk are nothing more than six inches, but symbolize so much more than what meets the eye.

“To see their eyes light up when they see it, it’s one of the nicest things I think we do for them,” Bill said.

Along with 13 volunteers, also veterans, Bill provides hospitalized veterans with a booklet called the Ohio Benefit Booklet, which contains events and opportunities exclusively for veterans. They also give packets that include a brochure on mental health benefits and a list of places that give veteran discounts – as well as transportation there and back.

There is also the Honor Flight, a trip free of charge for veterans to be able to go to Washington D.C. and see and experience the memorials. The flights take up to about 70 to 80 veterans per flight.

The most important thing in the program, Bill thinks, is spending time with the veterans. He makes it his mission to ensure that every single veteran feels cared for and supported, especially those in the hospital. They are each unique, with different stories to tell about their time in service and just in life general.

“There was once a veteran who [was] in the hospital about to give birth,” Bill recalled “She was a double amputee, who had lost her legs in Afghanistan.”

Through his work, Bill was awarded the nationally renowned Jefferson Award in 2015, as well as the Columbus CEO volunteer of the year award this year for healthcare achievement. Although he is grateful, he only wants one thing out of this volunteer experience.

“I would love to see this program go to every hospital in this country,” said Bill. “That’s how important I think this program is.”

Before Veterans Day this year, Bill plans to speak at high schools about veterans and about being one, emphasizing how imperative it is that kids understand history from veterans themselves.

“Anything that we can do for the veterans is something important,” said Bill.

If you want to help other veterans, like Bill is doing, search All For Good, for volunteer opportunities in your area.