As a child, Rosie Arbittier, participated in walkathons sponsored by her local synagogue and placed flags on soldiers’ graves on Veterans Day. That spirit of volunteerism continued into her teens, when she started tutoring special needs students at her middle school in York, Pennsylvania.

The experience was an eye-opener.

“I began to see how isolated these kids were,” says Rosie, now 17. “They were told not to talk to me unless I talked to them first. They weren't allowed to audition to be in a school play or to try out for a team. They spent their whole day with the same students and it was obvious that they just weren’t getting enough opportunities to socialize.”

When she reached high school a few years later, Rosie put her concerns into action by creating an after-school club for the kids. She approached a sympathetic teacher who helped her craft a “business plan” that would persuade school administrators of the validity of her idea and that she, at just 16 years old, was up to the challenge of managing the whole thing.

“It wasn’t easy,” she says. “It took a lot of trying.” Eventually, though, they gave her a chance.

Now in its second year, “Rosie’s Class” meets every Thursday for just more than an hour. This year, 10 middle- and high-school students with challenges ranging from anger management to Down syndrome are participating in the class. Arbittier leaves the afternoon’s activities up to the students, but draws from a series of lesson plans that she’s developed — crafts projects like tie-dying shirts and activities like scavenger hunts. 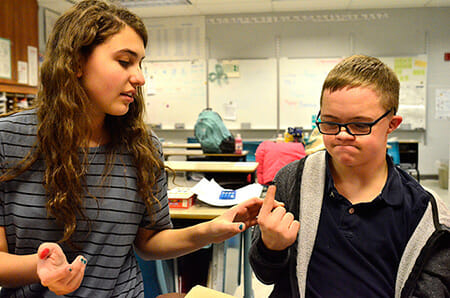 Rosie has enlisted nine of her friends so the class runs at a one-to-one student to volunteer.

“I’ve been amazed at how willing young people can be to participate in community service if they’re just prodded,” she says. And it’s become a win-win situation, she adds. “The volunteer students have learned so much by getting beyond preconceived notions and social constructs and realizing that we’re all just people. I think they have as much fun as the special-needs kids do.”

Besides the weekly activities, the class also works on longer-term projects like writing and filming a short movie, and staging a talent show. Sometimes, these result in the most dramatic transformations.

“Last year, we had a 20-year-old student with Down syndrome who early on had a lot of trouble participating and opening up,” says Rosie. “We spent a lot of time at the class encouraging her to speak up and to interact with the others. By the end of the school year, she was able to get up on stage, wearing a giant ball gown, and belt out ‘Let It Go.’ It was as if she was just waiting for a chance to shine.”

Such experiences have convinced Rosie to pursue a career in nonprofit management and public policy at Princeton University, which she’ll enter this fall.

“I’m majoring in those subjects so I can take Rosie’s Class national,” she says, confidently. She plans on starting small — introducing the effort to two other towns in Pennsylvania before moving on to two other nearby states.

“I think it’s going to be really hard to do, but it will be worth it,” she adds.

Those interested in helping Rosie’s Class gain momentum, bringing the program to their school, or donating art supplies or other items can contact the Daily Point of Light Award program manager at [email protected].