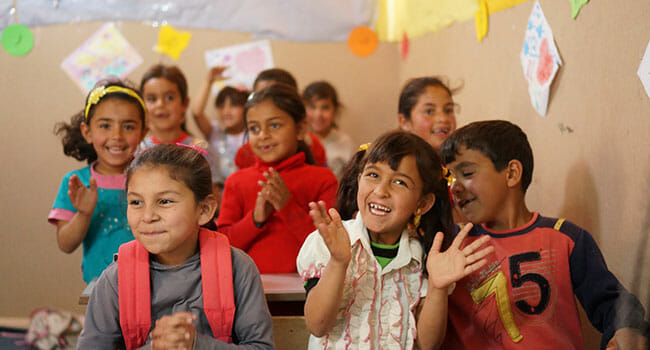 To most people, Syria is a distant country caught in the crossfire of a horrific civil war.

But to Rose Farah, 18, Syria is like a second home, a place she summered with grandparents and cousins, a country of tradition, warmth and family. Farah was 13 when the war broke out, a tragic turn of events that changed her world and separated her from family and loved ones. 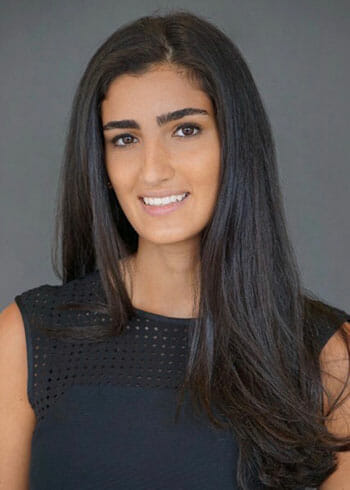 Now a senior at Convent of the Sacred Heart in New York City, Farah learned at an early age the importance of social justice and community service. “Sacred Heart taught me the impact even one person can have,” said the student body president. “When the war broke out, I knew I had to do something to help those affected.”

Then she discovered Jusoor (“bridges” in Arabic) which is a non-partisan, non-religious NGO of expatriates committed to providing opportunities for Syrian youth through programs in the fields of education, career development, and global community engagement. “I was blown away by the work they were doing.” When she was 15, Farah signed on as an intern. She now works with the organization as a staff member.

A pressing problem for the thousands of children living in refugee camps is not being able to go to school. One of Jusoor’s main programs is its Refugee Education Program, which gives children the chance to study at Jusoor schools until they can be enrolled in schools in their host country. “Many of these kids have been out of school for five years,” she explained. “They are away from home, away from everything they know.”

Without an education, their hope for a better future is diminished. Education is the path forward.

In her sophomore year, Farah organized a fundraiser at her school with raffle prizes donated by local businesses. “It only costs $600 to send one child to a Jusoor school for the whole year, including transportation and lunch.” The raffle raised $1,500 the first year, and $7,200 the second, funding the education of 14 Syrian refugee children.

Jusoor is a small organization, and from the start, Farah has worn many hats, from organizing an international volunteer program, to accounting and program management, to creating marketing materials and planning local and global events. 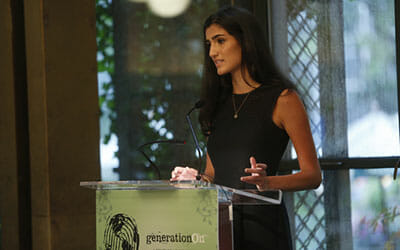 One of Farah’s current roles is serving as the coordinator for Jusoor’s 100 Syrian Women, 10,000 Syrian Lives scholarship program, which will bring Syrian women to universities in the United States and Canada. After working their entire lives to make it to the university level, these promising young women have been forced to stop their studies as a result of the ongoing crisis. The program awards scholarships of up to $50,000 per student, and recipients will be attending schools including Harvard, Brown, and NYU beginning this fall. “Their goal is to go back to Syria and help rebuild,” she said. After reading their applications, conducting interviews, and communicating with these women on a daily basis, Farah believes that they are the future of Syria.

As for her own future, Farah is interested in international human rights law, but she’s still considering her options. In 2015, she interned at the United Nations where she presented a final project on the Syrian refugee crisis. “Helping others, whether on an international level or in my local community, gives meaning to my life,” she said. “I truly believe that if you can transform one person’s life, that is everything.”

Every child deserves access to education. To help the children and youth of Syria realize their dreams, check out Jusoor’s website for ways to get involved.