When construction began on the San Carlos Community Garden in San Diego, Calif., in March 2012, retired Navy and federal employee Ray Blanchard was one of the first to volunteer his services. Since then, Blanchard has donated more than 1,000 hours of time – both constructing the raised garden plots and working to solicit donations and other assistance from local businesses, religious groups and community organizations. 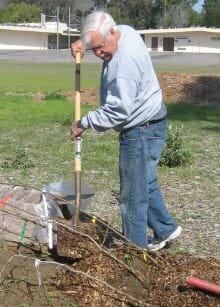 Blanchard is credited with building most of the completed garden beds, and thanks to his efforts and those of other volunteers, the project is already more than half completed. Located on the campus of Springall Academy, a K-12 school specializing in special needs students, the San Carlos Community Garden has a unique dual mission: It both provides rental garden plots to community residents and serves as an outdoor classroom where Springall students can learn gardening skills and cultivate food served at the school.

“I was excited about this idea from the moment I read over the plans,” says Blanchard. “Nothing had been done with that land for years, and now it's both a functioning garden for the neighborhood and a place where these kids can learn everything about the food-growing process. Kids just think of vegetables as something from the supermarket, but these students are planting and growing – and collecting the harvest for use in real meals.”

The Community Garden currently has fruit trees and more than 50 functioning plots used by individuals, the school or organizations. The completed garden will not only include many more growing beds, but also a small amphitheater that groups can use for instruction and presentations. Blanchard, who volunteers 20 to 25 hours a week, says he is still as enthusiastic as he was when they first broke ground.

“This has been very gratifying,” says Blanchard. “I loved the design, and I’ve been amazed at how quickly the community has wholeheartedly embraced the project. … I’m delighted to be a part of it, and I can’t wait to see all the work come to fruition.”