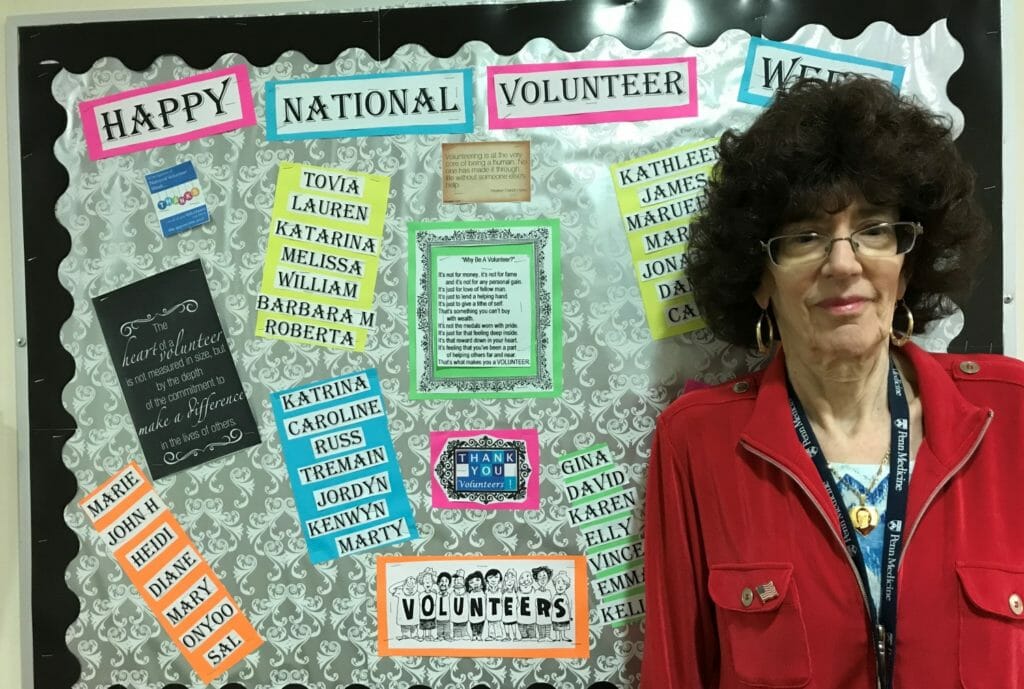 Ten years ago, if you had asked Barbara Manfredi if she could volunteer at an inpatient hospice unit, she would have said absolutely not.

“I would never have thought it was something I would do or could do,” she said. “But after I lost my mother, my father and then my husband, the people who were most important to me, death didn’t scare me anymore.”

Manfredi, who retired after 37 years working for the Philadelphia School System, didn’t know a thing about hospice until her husband was admitted to the 20-bed Penn Wissahickon Hospice just outside of Philadelphia in 2008, shortly after it opened. He was one of the first patients to pass away under the unit’s care. “It is still a sacred place for me, where we spent our last time together,” she recalled. After taking time to process her own grief, Manfredi returned to the unit, seeking training as a hospice volunteer.

“I wanted to give back,” she said. “Hospice is so wonderful, so supportive, not just for the patient but for the family and friends.” At first Manfredi worked in the office and at the front desk as a greeter. But after the requisite year had passed since her husband’s death, she started working with patients.

“I have met people whose lives would never have crossed mine. I have learned so much, been so inspired, met some of the nicest people.” Until her husband’s illness and death, Manfredi had no real experience with hospice. “I thought it was only for people with cancer, or AIDS. It would have helped my mom so much, and she had COPD. It’s all about dignity and respect.”

Manfredi spends two or three hours a week with “her” patient, visiting in the home or at the hospice unit. Some patients “graduate” – improve enough to exit the program. She gets to know folks over the course of five, six, seven months, hears their stories, holds their hand.

“In a way, I think maybe I’m being a little selfish,” she said. “Volunteering gives me the chance to know what I can expect when it’s my time. It takes some of the fear factor away.” She feels most useful providing company and comfort when her patient is on their own, without the benefit of loving family members.

“I know people might feel apprehensive about volunteering like this, they think all you’re going to do is talk about death. But that’s not the case. I treat them the same way as anyone else. We talk about what interests them, about their life. They aren’t defined by the fact that they are dying.”

Do you want to make a difference in your community like Barbara? Visit All For Good to find volunteer opportunities in your area.