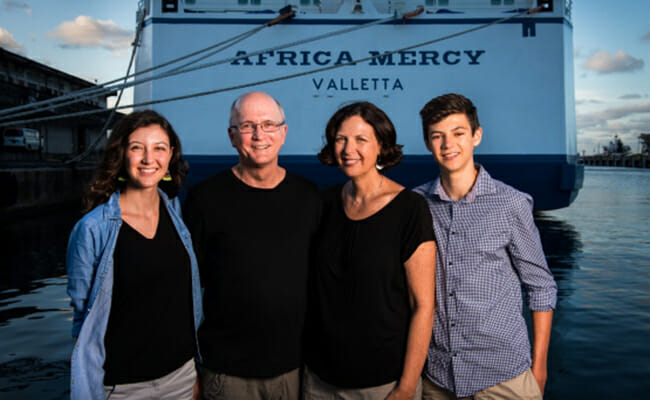 Dr. Gary Parker first volunteered aboard a Mercy Ships hospital ship thinking it would be a three-month journey. However, three months turned into 31 years, and Gary and his wife Susan, who he met on board, have devoted their lives to help those living without access to safe, timely and affordable surgical care.

Gary, an oral and maxillofacial surgeon and chief medical officer, specializes in the treatment of tumors and other deformities of the face, head and neck – giving his African patients a second chance at life.

“I walked into the waiting room full of men, women and children all with advanced pathology that I had only seen in textbooks,” Gary said, recalling the first time he walked into a local hospital. “It was overwhelming to look into the eyes of a 30-year-old woman with an un-treated cleft lip that should have been repaired when she was three months old and feel her lifetime of shame and embarrassment that didn’t need to happen.” 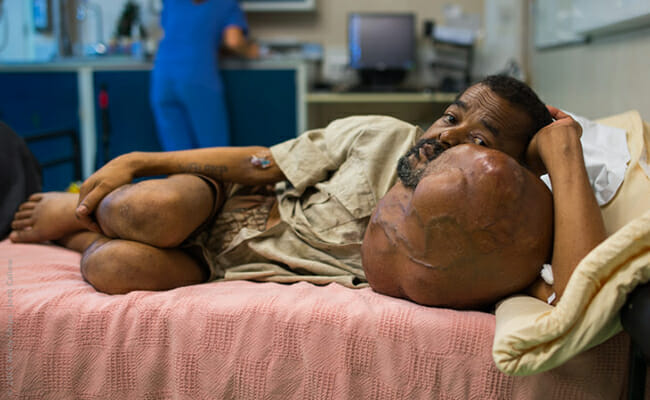 Sambany, a man from a remote village in Madagascar, is just one of the thousands of patients Gary has treated. With a 16-pound tumor weighing heavily on Sambany’s face and neck, he was unable to do anything except wake, eat and sleep in a mundane cycle.

“I could not do anything,” Sambany said, in a Mercy Ships blog post.“I was just waiting to die.”

One day, he received word that the Africa Mercy was sailing towards Madagascar and would be treating patients for free. 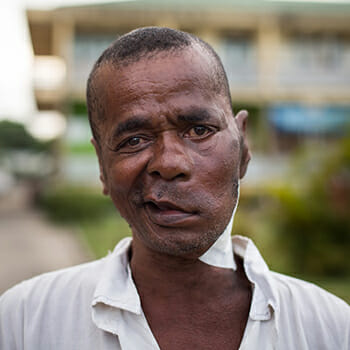 Seeing his desperation, his family sold a rice field to pay for his travel. Five people took turns carrying Sambany on their backs for two days to get him to the closest road. After a grueling six-hour ride in a bush-taxi, Sambany finally made it to Africa Mercy.

Dr. Gary Parker and his team operated on Sambany for more than 12 hours. When Sambany looked at himself in a mirror for the first time without his tumor, he said, “I like it. I am happy,” and later added, “I am free from my disease. I’ve got a new face. I am saved!”

Living on a ship with 400 crew from more than 35 nations has its challenges. As children, Carys and Wesley sometimes thought life in America might be more interesting or exciting, but their commitment to those who didn’t have the privileges they had helped them to persevere.

“I have a deep conviction that everyone deserves a seat at the table of the human race,” Gary said. “You need to be able to say to Koffi, ‘You’re three years old. Your face is deformed’ or ‘Hawa with your big tumor’ or ‘Fatimata with terrible burn scars that make it not possible to move your arms, legs or neck, you’re still a member of the human race. We honor you. We recognize you and we want you to have a seat at the table.’” 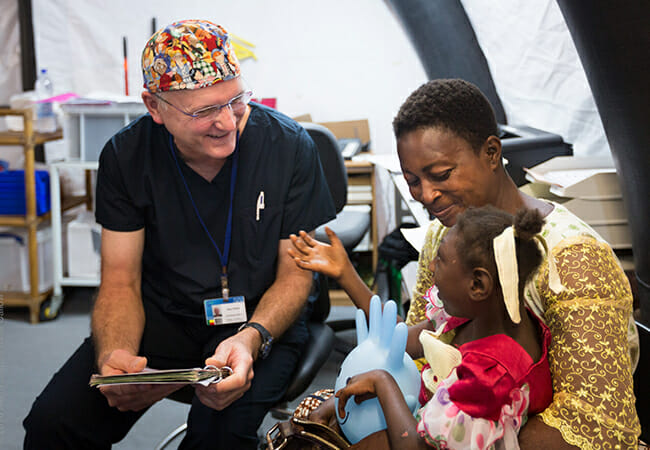 Susan Parker, who first boarded the ship when she was 25, has filled several key roles over the years, most recently as senior chaplain to the crew.

It’s no doubt that the Parker family and the rest of the Mercy Ships crew are changing the lives of their patients, but Susan said the patients have had an impact on her life as well.

“I can sometimes become preoccupied with situations in my life that aren’t going the way I’d like them to, or something I miss back in the States,” Susan said. “And yet when I take the time to walk down those three flights of stairs to the hospital ward and I see the conditions people are suffering with and I spend time talking to them and they’re smiling and thankful … I’m reminded about what’s really important in life and that happiness truly is an inside job. I’ve been given a gift by living here – it’s developed in me a lifestyle of gratitude.”

Carys, 24, and Wesley, 20, grew up on the ship and graduated from its school, the Mercy Ships Academy. Wesley is currently studying health sciences at Whitworth University and Carys, who graduated from Whitworth, returned to the ship last year as a crew chaplain. She is now back in the United States and working on her master’s degree at Fuller Seminary.

“Once you’ve been on the ship, once you’ve seen the transformation of the patients and the unity of this crew, it’s kind of addicting,” Carys said. “[I knew] that I wouldn’t be content until I got to come back full circle as an adult and give back to the community who helped shape me into who I am.”

Susan wants people to know that they’re no different than any other family.

“We’re not special. We’re not super humans,” Susan said. “We’re just normal people who have taken that step to use the skills we have to benefit others. We just happen to live on a Mercy Ship in Africa, but kindness is free and everyone has the opportunity to give it away no matter who or where they are.”

“We all have something to give whether it’s our time, our finances or our skills,” Susan continued. “When everyone does their little part, we’re going to see our world repaired.”

The Parkers and the rest of the Mercy Ships volunteers are able to live and work without salary because they are sponsored by generous donors. Those interested in supporting Mercy Ships can volunteer, donate or sponsor a crew member. For more information, visit mercyships.org.

Do you want to make a difference in your community? Visit All For Good for local volunteer opportunities.