Many students are keen to forget about their school assignments upon turning them in. For Ohio high school student Jacob Hervey, however, a research paper on education in the American prison system inspired him to create his own nonprofit, Books Behind Bars, in the hopes of bringing positive change to inmates at his local jail.

Through extensive research for his paper, Jacob learned about the lack of educational and reading materials in jails and prisons across America, as well as how inmates who read while in prison have a lower chance of reoffending once they are released. This inspired him to begin collecting books to donate to his local jail. Now 17, Jacob has spent the past year collecting and donating about 1,500 books to his local Stark County Jail, and hopes to begin donating to other nearby jails as well.

Describe your volunteer role with Books Behind Bars.

Books Behind Bars is a nonprofit I started last year. It tries to bring reading materials and other sorts of books and nonfiction material into prisons, so the inmates have a chance to read and reflect while they are in there, so there is a lower chance that they commit recidivism.

What made you want to start this organization?

The main reason I started it was in my junior year, for my English course, I had to write a research paper and the only limitation my teacher put on it was it had to be about education in America. I chose for my subtopic to be education in the American prison system. I did a month of pretty intense research with that course. With that, I realized the mere scarcity of books. It’s like a drought in our prisons of reading material. That’s when I contacted Frank Forchione, one of our county judges, and he helped me contact sheriffs and other officials in our area to really get through the paperwork and bureaucracy part of it. From there, I’ve just been collecting books and distributing it to our local jails.

Have you received any feedback from the inmates or the jail you donate to?

When I delivered my first round of donations to the county jail, I got overwhelming feedback right away from the sheriffs and other officers there. They welcomed my friends and I who were bringing [the books] very nicely. They brought me into their office and thanked me. On the inmate side of things, people have emailed me thanking me from their family and from the inmates themselves, showing their gratitude, which was really meaningful because I like hearing the first-hand account of how people are affected.

Our city mayor has sent me a letter, our state representative. Seeing the support it’s gaining is pretty empowering to me, because I feel like a lot of times we see prisoners and inmates get overlooked in society. Because they committed a crime once, we like to label them as always wrongdoers, but I think the fact that it’s receiving more support from my community is indicative of how the opinions are changing in my area. 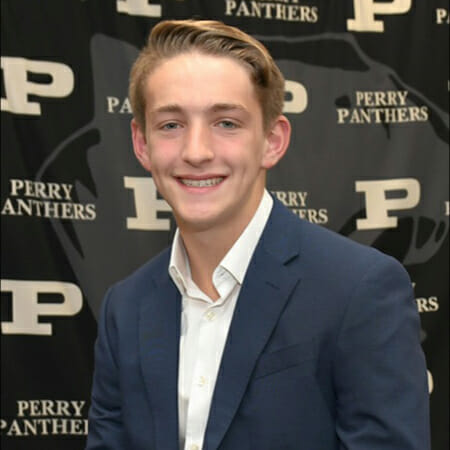 What would you want people who put that label of ‘always being wrongdoers’ on inmates to know?

What I always like to say is obviously, these people are in jail for a reason, but most of the time it’s for nonviolent offenses. Ninety percent of people in county jails are for drug offenses. But what I like to think is even if these people have committed a violent or even nonviolent crime, I think education and books are a critical way to break that cycle. What happens across the nation, somewhere between 80 to 90 percent of inmates are rearrested in the next decade and land themselves back in jail. Reading and education while in jail is a way to help them reflect on themselves. It helps them once they leave jail to really not fall into that trap of committing crime over and over again. What I say is, most of the time these inmates aren’t violent people like we stereotype them as, but even for people who are [imprisoned for violent crimes], it’s critical to help them and give them these materials so it doesn’t become a cycle of crime.

How do you fundraise and gather the books?

There are a variety of sources I get my books through. The first is through pure donations from family and friends. For example, there was an article in our local newspaper about my project, and from there my friends, family and some community members I had never heard of sent donated books to me. The second avenue I collect books is through companies and entities that donate. For example, the very first large donation I received was from Akron Bookstore. They were closing so they invited me and a couple of my friends to go up there and take any books we wanted from the entire store. Also for example, yesterday I drove about an hour to this church that had their own library that they were cleaning out, and they donated a few hundred books. The third way I get fundraising and books is through monetary donations. There’s a third-party nonprofit that collects money from local community members. Just recently in the last month or so, they told me they were going to be donating their quarter revenue to Books Behind Bars. That’s going to be around $3,000 in cash that is going to be donated to my nonprofit, and then I will choose what books to purchase with that and what to use those funds for.

Is there a certain type of book you are looking for when you’re collecting donations?

When I’m collecting donations, I normally accept them all and vet through them to see which ones are most likely to be accepted well by the inmates. Whenever people ask me when they’re purchasing books, which types people like most, [I say] in the world of fiction, a lot of these inmates like military history and sports fiction stories. Realistic fiction is their favorite genre, typically. Also, I like finding self-help books and ‘Chicken Soup for the Soul.’ Those types of books are really good just because the purpose, like I said, is to reduce recidivism and this cycle of leaving jail and just falling right back into the cycle of crime, and education is a powerful tool that can break that. I try to get books that can help them reflect more on that. I’m trying to also buy GED books for these people so they can study while they’re in jail and hopefully when they leave they’re encouraged, because many of them lack high school diplomas depending on the demographics of where [the jail] is and if it’s a county jail or prison. Regardless, I’m trying to get some GED books to help study for that when they leave.

It definitely has reaffirmed my belief in the importance of not stereotyping and stigmatizing criminals. I think we as a society really like to try to stigmatize and label them. Through this process I also learned the importance of initiative. I think a lot of times when I ask for donations from people, they look at me strange because I am a 17-year-old trying to start my own nonprofit to help some stigmatized group in our society. I think from a youth perspective, it’s important to hear the youths’ voices and I think this project has showed me the power that even one person can have, let alone a minor. I think my message to the world is you really need to trust the voices of the youth because they can have messages as powerful as even the most senior of people.

In my case specifically, I think it’s important to break the cycle of crime because that effects everyone in the U.S. Somewhere close to 80 to 100 billion dollars a year, we spend housing these criminals who commit recidivism specifically. I think in the more general and literal sense of giving back to your community — I’m Jewish and we have this saying ‘Tikkun olam,’ which means repairing the world. It’s almost your obligation to help the people. I know if I’m in an area of strife and need some outreach from people in the community, I can expect that from my community, the same way I want my community to be able to rely on me. It’s more of a yin and yang relationship, almost.

Do you want to make a difference in your community like Jacob? Find local volunteer opportunities.