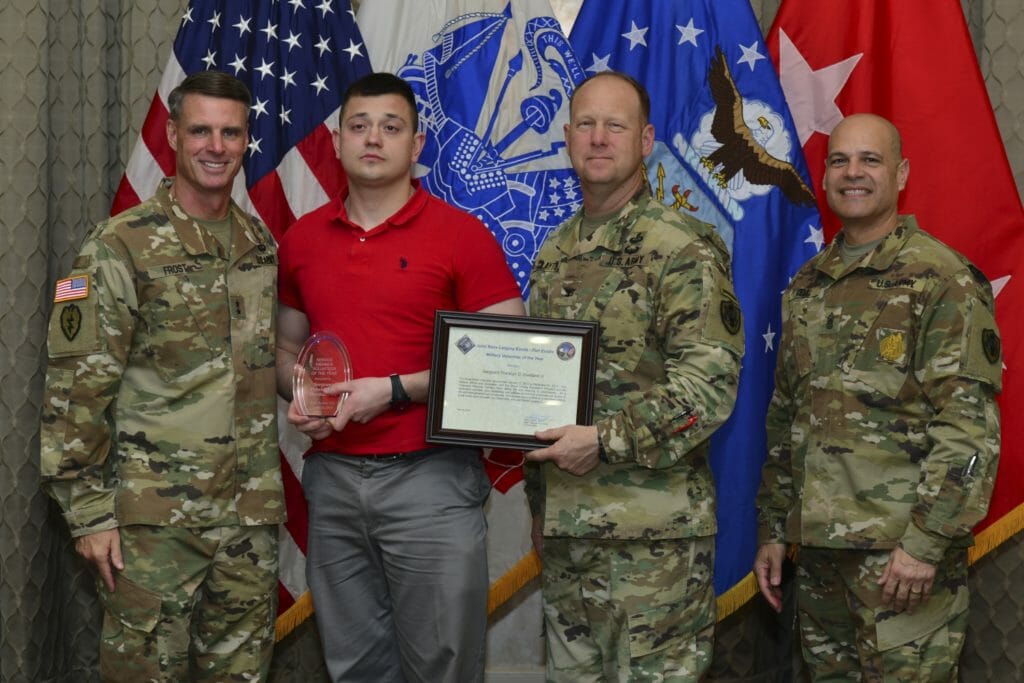 Franklyn Haviland says calls waking him up at 3, 4 or 5 a.m. in the morning don’t bother him because he knows the person on the other end needs help.

In 2013 after a spate of drunk driving accidents in the Washington state area, where he was stationed as a military police officer, Franklyn joined forces with his friend to combat drunk driving. By launching the Drunk Driving Prevention Program (DDPP), Franklyn helped lead a growing volunteer force through taking middle-of-the-night calls from service members who needed a safe way to get home.

The DDPP now totals around ten chapters nationwide, and is committed to getting those in the military, their vehicles and their friends home safely. Franklyn is on a mission to eradicate drunk driving accidents, in which 29 people die from nationwide each day, through his service and is today’s Daily Point of Light award honoree. Points of Light spoke to Franklyn to learn more about his work with DDPP.

I’ve been a military police officer for over seven years. Sometimes when you get called, you feel good about the things you do to help people. Sometimes you get called, you see the absolute worst in people. To volunteer and help the community ensure that one less person won’t drink and drive, and to stop them from hurting themselves and hurting others around them… that’s what inspires me to volunteer.

Describe your volunteer role with the Drunk Driving Prevention Program.

Day-to-day it’s a total volunteer organization. I am the national fundraising coordinator for DDPP so I find people the organization can partner with, either a military friendly organization or one that we share some type of values or objectives with. Each chapter of DDPP has a different demographic, so we tailor our events and fundraising based around the chapter. Hawaii is a party and touristy area, they have a larger nightlight so we have more calls from them. The Fort Leavenworth, Kansas chapter has less of a nightlife, so we program events that fit that community.

It’s when our volunteers call me and talk about the program. I have a team who is really a family that’s worked with me for a long, long time. These volunteers will call me up and I can hear the excitement in their voices about how the program is growing and how motivated they are. They know we are making a difference and doing something to help the community, and that’s really rewarding to me.

There’s just so much that I’ve done. When I started working at Fort Eustice in Virginia in 2016, I realized that drinking and driving was a huge problem in the state. I decided I wanted to branch out and establish a chapter there. We put in a lot of hours, and last July we reached over 100 volunteers. The entire program has been a lot of work, but it’s definitely helped  strengthen my work ethic. When I was growing our chapter in Virginia, every Friday and Saturday I’d have my phone on loud. I’d get calls at 2 and 3 a.m., and it wouldn’t bother me.

You help provide safe transportation. What’s the ideal car you would want to be picked up in?

(Laughs) That’s a tough question. I used to valet cars back in the day. There are so many to pick from. My brother-in-law has been going on and on about a Corvette, but the problem is when you go to pick someone up, you end up picking up three to four other people they are with. I’d have to say a big truck like an Escalade, or something where you know you have a lot of room, and I’d get to relax for however long it’s going to take for me to get them home.

I have always been passionate about ethical and civic responsibility. When people don’t feel like they have a voice in the country, they feel like the country is not going the way it should. We need more people to dedicate their time to civically giving back.

I never thought that my program would get as big as it is now, and I definitely never thought I’d be sitting on the phone doing an interview about the program. If you have an idea or something you think can make the world a better place, put it down on paper, put it into action and make it a reality.

Do you want to make a difference in your community like Franklyn Haviland? Visit All For Good for local volunteer opportunities.