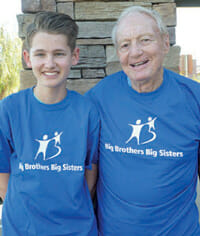 Larry Galuppo’s long-term commitment to mentoring his Little Brother Landon exemplifies the enriching intergenerational relationships that can form as part of Big Brothers Big Sisters, a program that carefully pairs children (“Littles”) with screened volunteer mentors (“Bigs”) and monitors and supports these one-to-one mentoring matches throughout their course.

Galuppo is a retired Navy Commander, serving both active duty and reserve duty. In November 2003, Galuppo registered with Big Brothers Big Sisters of the Desert (BBBSD) after discovering that a retirement built around playing golf was less satisfying than he expected. Galuppo became a Big Brother Mentor to his Little Brother Landon in 2003 when Landon was seven and he was 66.

Now, Galuppo is 76 and Landon is 17, graduating high school and the pair are celebrating their tenth anniversary year as a match in the BBBSD program. The two have developed a family-like bond in the course of learning life lessons from each other. Landon has been inspired to overcome a learning disability and is college bound because of the sincere weekly support of his adult mentor, Galuppo. In turn, Galuppo has been rewarded by his own growth while participating in his Little Brother’s over all development.

Galuppo’s commitment lasting ten years, is BBBSD’s longest such mentoring relationship in the history of the 15 year-old nonprofit organization. According to Galuppo “the beauty of being a volunteer in this program is their motto is Make a Difference in the Life of a Child, and I add on to that, A Child Making the Difference in the Life of an Adult.” As a Senior Mentor for BBBSD, Galuppo serves as a volunteer spokesperson inspiring others to volunteer and to become donors to support the mentoring work in the desert.