Sometimes the answer to a simple question isn’t good enough.

That’s what happened to Kathleen Foley Hughes when her developmentally disabled son Charlie was in middle school in Palo Alto, California.  “I asked what was the plan to prepare Charlie and kids like him for after high school.”  The answer was to bus the kids to a program at the VA Hospital. “These kids are already marginalized,” she says.  “IT didn’t make sense to me to take them away from the school they are used to.” 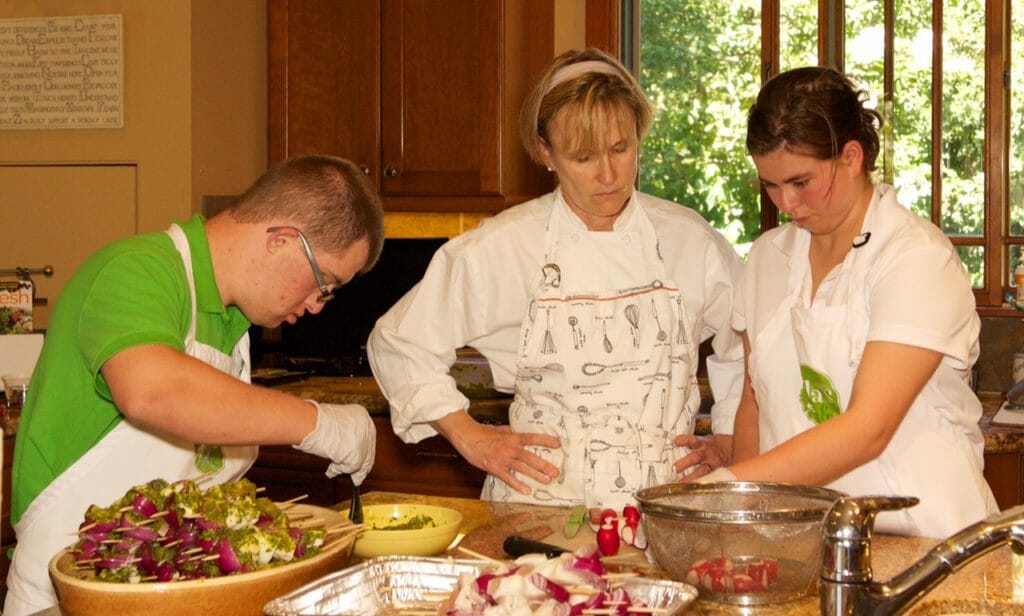 Foley Hughes is helping put people with disabilities to work.

So Foley Hughes proposed a program that would train people with disabilities to work in commercial food service.  Her background is in events and catering.  “There are a lot of mainstream jobs that these kids and adults could do with the right kind of help.” The school agreed, as long as she handled funding and managing the program.

So she did.  That was in 2008 and the response was so overwhelmingly positive to the onsite café at the school that the notion of going public was the next natural step.

When a café space was proposed for a local library, Foley Hughes competed with the likes of Peet’s Coffee and Starbucks and got the contract.  When construction problems delayed the opening, Foley Hughes ramped up the catering business to keep her kids working. Ada’s Café finally opened in December 2014. .

Foley Hughes and her son Peter, 26, Charlie’s twin, run Ada’s -a reference to the Americans with Disabilities Act.  “Peter has a degree in education and is wonderful at breaking job responsibilities into meaningful tasks that our employees can master. He sets them up for success.”

Charlie is also on the job five days a week.  There are 52 people on Ada’s payroll ages 16 to 54, with 33 of them adults with disabilities.  “Our team is phenomenal.  They do just about every job, from making sandwiches and salads to running the cash register and waiting on the guests.  The Espresso machine is tough, but other than that, they do it all,” says Foley Hughes.

“Some of these folks commute two hours on public transportation each way to get to work,” she said.  While there are occasional snafus with service – as there are in any restaurant – Ada’s is known for its friendly atmosphere and welcoming smiles.  “This is a labor of love,” she says. “The sense of accomplishment and pride our people feel is just priceless.”