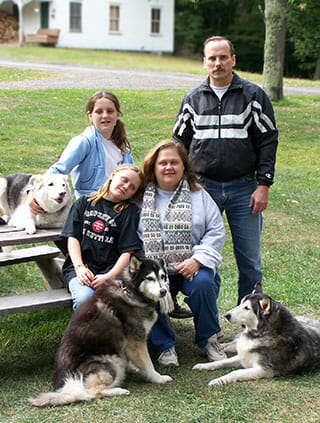 Julie Ogden, with her husband Curt and daughters Amy and Kat, and their dogs.

“My mother always took in strays, so I just assumed everyone did,” says Julie Ogden. “I couldn’t imagine not sharing my life with an animal; there was no great leap into actually taking in my own fosters.”

She estimates that over the years, her family — husband Curt and their now-grown children, Amy and Kat — has taken more than 1,000 animals, most of them dogs, into their New Jersey home.

“Sometimes, we’ve had 10 or 15 animals in the house, including our own dogs,” says Ogden. “When most girls were playing with dolls, my four- and five-year-old were bottle-feeding puppies on their laps.”

Fostering can be hard, she says, but the alternative is worse. “We all cry when an animal leaves but we’re so happy to send it to its forever home.”

Even as no-kill shelters and rescue groups have proliferated, Ogden’s fight to save endangered dogs hasn’t slowed down.

“Every year, more than 3 million animals are still killed,” she says. “In my area of the country, we’re still only adopting out about 40 percent of shelter animals.”

The reasons that animals end up in shelters are myriad, Ogden says. They include the over-breeders (so-called puppy mills, as well as owners who do not spay or neuter their pets) and the overwhelmed (owners who are not prepared for the financial and time commitment of bringing an animal into the household).

Over the years, Ogden and her family have participated in group rescue efforts – once, joining about 100 volunteers who spent five days driving to and from Georgia to save more than 200 animals from a facility that was euthanizing an average of 35 puppies and kittens every week.

“We did it to raise attention, to make a statement,” she says. “We had signs on our cars and when we got there, one by one, we adopted the dogs and cats and emptied the shelter. Then we drove them back north and adopted them out.”

Amy participated in that effort, and Kat embarked on a similar trip the following year. “They were unusual ways to spend your summer vacation, to say the least,” says Ogden.

As the caravans illustrate, Ogden reminds everyone that she’s “just one of so many” who are part of grassroots efforts dedicated to rescuing animals. She works hard to change the way people think about animal welfare, raising awareness in the larger community to encourage more people to contribute to the cause.

One way this middle school teacher achieves that is by involving her students. Along with tech teacher Fred Matzan, Ogden advises the Woodcliff Animal Rescue Engineers (WCare) Club, encouraging kids to create videos about pets that need adoption and post them on YouTube. Students at the school have also organized fundraisers and participated in letter-writing campaigns advocating for animal welfare.

“We even had one parent volunteer as a foster themselves, and the family wound up keeping the dog!” Ogden says.

She is also active in organizing the annual Dogfest, now in its 8th year. The festival, which last year drew about 5,000 people, is alive with food and music and showcases local animal adoption groups and their charming charges. In this celebration of all things dog, families bring their pets and enter them into costume and talent competitions — and perhaps walk away with one more dog than they came with.

“There are so many ways to help with the heartbreaking problem of abused, neglected, and left-to-die animals,” Ogden says. Fostering and adoption are most-needed ways for people to help, she adds, but there are many ways to get involved as a volunteer. To get started, visit www.petfinder.com to identify local rescue groups or search for local volunteer opportunities at www.allforgood.org.