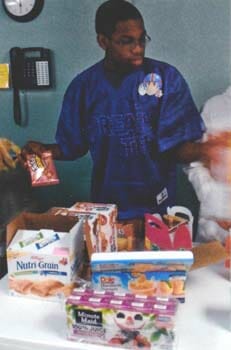 When high school junior Isaac McFarland participated in a 4-H tour of a Shreveport, La., food bank last year, he found the shelves sparsely stocked. He was startled to learn that many local families didn’t have enough to eat, and that food banks and shelters were struggling to meet the needs of the hungry.

The 16-year-old, who works on his family’s cattle ranch near Shreveport, decided to help. Last spring, with assistance from his parents, Isaac created his own foundation, Game Changers, to help fight hunger.

Aided by a $500 grant from the Sodexo Foundation, Isaac launched a campaign called Let’s Tackle Hunger. He purchased 1,000 miniature lunch boxes, which he named “tackle boxes,” and asked the art teachers and students at his school, 4-H members in multiple cities and local civic leaders – including the mayor and police and fire chiefs – to decorate the boxes in some personal way.

Isaac then raised money from 4-H, other community organizations, local businesses, students and community members to purchase nutritious breakfast foods. Students and 4-H members volunteered to pack this food into the lunch boxes. Isaac got 300 of his classmates at Caddo Parish Magnet High School, from all 40 student organizations on campus, involved.

But Isaac was just getting started. He quickly enlisted the help of his mother, Regina, to help provide meals, cooked with beef from the McFarland ranch, to local food shelters. In 2013, mother and son prepared giant meals for two facilities, Providence House and the Shreveport Rescue Shelter. Isaac plans to cook for both shelters at least once a year.

Last fall, Isaac held another major Game Changers event. He asked police, firefighters and hospitals in the Shreveport area to set up collection sites for a two-week food drive. At the end of the drive, on Make A Difference Day, Isaac and volunteers delivered more than 6,000 pounds of donated items to the Louisiana Food Bank.

“I want to do anything I can to help people in situations so bad that they aren’t even able to get simple nutritious foods,” says Isaac. “Many of them did nothing to end up in these situations, and I think if we are able to help, we should.”