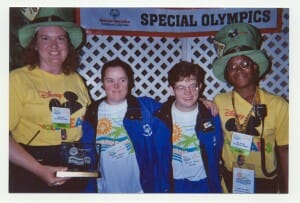 Whether it is the Special Olympics, the Disney VoluntEARS program, or the Make-A-Wish Foundation, Ingelis Jenson is deeply involved and following that philosophy. In 2009 alone, she spent the equivalent of 18 weekends of the year volunteering.

Ingelis paid her own expenses to attend the Special Olympics World Winter Games, spending her vacation there to volunteer for seven days in a row, eight hours a day, in freezing temperatures with duties which included shoveling snow. She truly embodies the passion and indomitable spirit of the late Eunice Kennedy Shriver, who founded the Special Olympics in the 1960s.

Ingelis leads volunteer projects and helps promote and recruit volunteers for the Disney VoluntEARS program, with which she has been involved for 17 years. She began when the program was launched in Los Angeles.

As a wish-granter and an escort, she interacts directly with the seriously ill children and their families visiting Disney parks through the Make-A-Wish Foundation. With the utmost professionalism, respect, and compassion, Ingelis ensures that each child has the time of their life. She personifies both the joy and impact of serving others; she never stops doing her part to change the world for the better.