Married for 40 years, Ray Hammond and Gloria White-Hammond have walked a remarkable life journey together, serving others. Both enjoyed careers in medicine – Hammond as an emergency room surgeon, and White-Hammond as a community health clinic pediatrician. 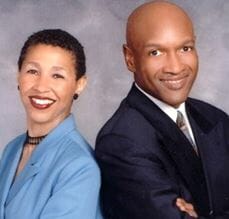 Both became ordained ministers and founded the Bethel African Methodist Episcopal Church in Boston. “I love what we did in medicine,” says Ray Hammond. “But we were called to reach out further, to address people’s spiritual and social needs.”

The church began in the Hammonds’ home with five parishioners. Today, with the Hammonds as co-pastors, Bethel AME is thriving, with a congregation of more than 600 and a host of programs that reach out to people in need.

Since its founding in 1988, Bethel AME has helped thousands of at-risk Boston youths to succeed in life through Generation Excel, a program launched by the Hammonds in partnership with local high schools. To reach more kids, and to address gang violence and high homicide rates in Boston during the early 1990s, the Hammonds became partners in the Boston TenPoint Coalition. The faith-based group – which works with community, government and private-sector institutions to help troubled youths redirect their lives – was largely credited with what became known as the “Boston Miracle,” a drop in citywide homicides from 152 in 1990 to 31 in 1999.

Keeping the focus on children, through Bethel AME the Hammonds launched a child literacy program and missions that have sent kids to help the homeless and disaster-stricken in New York, the Gulf Coast and other areas in the United States and to do humanitarian work in more than 10 other countries, including South Africa and Ghana.

In 2002, White-Hammond spearheaded a mission to war-torn Sudan and co-founded My Sister’s Keeper, a women-led organization that partners with Sudanese women to bring peace and reconstruction to the nation. Among its many efforts to improve social stability in Sudan, My Sister’s Keeper built a school for girls and created an adult literacy program for their mothers and other local women.

“Our service is just a small effort to repay a huge debt,” says Ray Hammond. “It’s a gift that my wife and I were able to spend long, rewarding careers tending to people’s physical needs. But it’s a greater gift that we both felt the need to move on, to help people with their spiritual needs and challenges.”