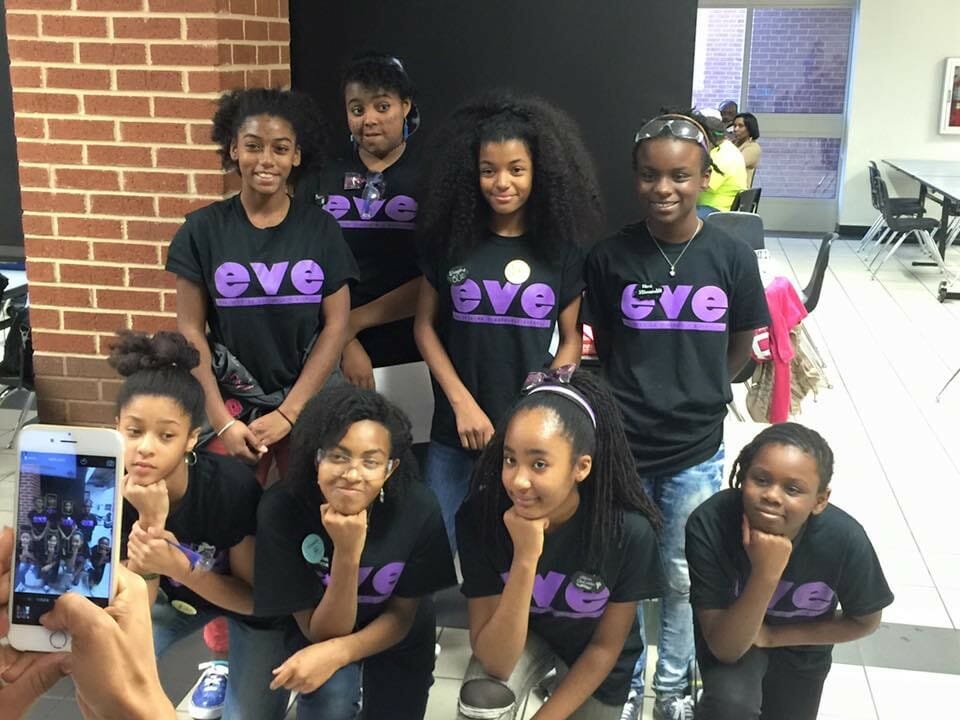 It’s no secret that efforts are underway nationwide to entice and recruit more young girls into science, technology, engineering and mathematics (STEM) fields. To date, these have been mainly male-dominated industries, but thanks to volunteers like Akili Allah — more and more girls are signing up to learn about STEM.

For the past five years, Akili has coached an all-girls robotics team, EVE, leading them to receive multiple awards for their robotic creations. She says that she is motivated by the desire for her daughter to feel welcomed in STEM and never question whether it’s something she could do as a career. Akili is today’s Daily Point of Light honoree, and Points of Light talked with her about her committment to service and education.

How did you begin volunteering with EVE?

Actually, my daughter is on the team. She had done robotics previously. My son and she were on a co-ed team when they were younger. They outgrew that level of robotics and were looking for the next level. One of the things we noticed in the younger team was that boys tend to take over. My daughter was really interested in continuing with robotics, and she was the one who motivated me to start this team. She loved robotics, and I asked her about starting an all-girls team. That way, all the girls would have a chance to share their ideas, and they could recruit their friends.

How did you get other girls involved?

We recruited with fliers and announced ourselves on Facebook and other social media outlets. I homeschool [my children], so I put it out there in the homeschool community, as well. We had an open house meeting where anyone who was interested could come and learn about the team and what we wanted to do. Originally, that first year, we had five girls involved. Now, we have nine. They range from ages 12 to 18 years old. We’re in our third year, and we get together three days a week or three to four hours each time.

What do you do as a team?

We compete in First Tech Challenges Robotics competitions. Usually, the season starts with us being given a game or competition that includes challenges or obstacles on a field. Once we receive these challenges, the girls have to come up with a unique robot design to overcome those challenges. They have to figure out a way to achieve their objective with what they know how to do based on their level of experience. Typically, they have 6-8 weeks to come up with their design.

Sometimes teams run into fundings issues — they might have the experience needed to conquer the challenge, but they don’t have the parts to do what they want to do. As a community-based team, we’ve had challenges every year coming up with funding. Usually, we do in-person crowdsource funding. We go to strip malls and display our robots and collect donations. During the competitions, we’ve also had challenges with programming. Our last lot of girls are now learning programming, and it’s helping out in that area.

What have the girls accomplished?

We did win last year’s judges’ award. There are a lot of awards in the competition. Even though we missed the mark on some things, we were still the judges’ favorite. They saw how much we were trying and embodied what a challenge team should be.

What impact do you feel you’ve been able to make?

I talk to the girls a lot about perseverance and not giving up. As I’ve said, funding has been a challenge, and we keep trying to come up with creative ways to get funding. And, I check in with their every year to make sure this is something they want to continue doing. They’ve all said they had a desire to do it. I think this will have a lasting impact — the fact they they don’t want to give up. They continue to be resourceful.

How have your fundraising efforts worked?

I think we’ve probably raised $2,500 just by going to the strip mall. We’re also thinking of writing a children’s book. We want to put one out there. We have the illustrations done, and we’re waiting until competition season is through to complete writing it. It’s aimed at 5-to-8-year-olds, and it’s about showing how girls can get into STEM. It shows how they don’t have to be intimidated by it simply because it’s something that boys do. We’re hoping that publishing it will fund the team in the future and inspire even more young girls into come into the field.

Why is it so important to you that you volunteer your time and efforts to this group?

My own mother, who passed away in 1999, was a welder who worked for the Navy. She always talked to me about the difficulties she had being in the field that was predominantly male. It was just something that was important to her. When I saw that some of that same spirit in my daughter, I knew it was something I couldn’t ignore knowing the struggles my mother had gone through. I knew she had a skill level that was constantly tested to show that her welding was as good as it was supposed to be. She always had to demonstrate that she was doing a good job, but even then she would be among the first people let go if there was a layoff.

STEM is a buzzword now, and it’s something that we know in America that we need more people involved in. When I saw my daughter, who is now 15, had an interest, I felt that it was most important to me to support her in any way I could.

Why do you feel it’s important to volunteer overall?

I have always felt if there were a need in the community — and you had the ability to do something about it — then you should. To be honest, I’m not on the same level with these girls and robotics. I’m a non-engineering mentoring coach. But, I still saw a need. Even though I didn’t start out knowing about robotics, we’re all working together. It was a community need. I saw it. I filled it. I didn’t even think about it.

What are your future plans?

I will continue to coach as long as my daughter wants to do it. There have been a few boys who were brothers, cousins, and friends of some of the girls on the team. We had a second team last year that was boys only. This year, unfortunately, there wasn’t enough interest to field that team and it fizzled out. I’m hoping to get that back together again. I want to start at the lower level. I’m hoping to have thorough pipelines for all grades, K through 12, in robotics. I know so many younger people are wanting to get to this level of robotics, so I don’t think interest will stop anytime soon.

Do you want to make a difference in your community like Coach Akili? Visit All For Good to find local volunteer opportunities.