Meet Don Stephens, who was surprised Oct. 27 with a Daily Point of Light Award from Points of Light Chair Neil Bush at a Mercy Ships event in Houston. Read Stephens' story and nominate someone you know as a Point of Light. 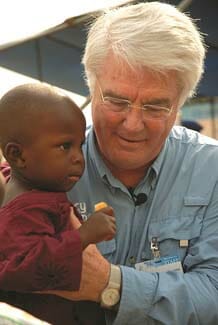 Don Stephens has a profound way of drawing people in – and keeping them there.

Dr. Gary Parker, an oral and maxillofacial surgeon, met Stephens 28 years ago. Parker was working in North Wales when he learned about the faith-based charitable organization Stephens had founded and still leads, Mercy Ships.

Since 1978 Mercy Ships, which runs the Africa Mercy – the world’s largest civilian hospital ship, has provided specialty surgery and other health care at no cost to millions of people from the poorest nations of the world who otherwise couldn’t access or afford it.

Parker loved the idea of helping address the medical needs of the world’s poor, but wasn’t sure that life aboard a ship was for him. That changed when he met Stephens, who was living and working on the hospital ship with his wife Deyon and four children when Parker arrived on board for a three-month trial in 1987.

“To get people interested, you need to hold up a worthwhile vision, and your personal integrity has to line up with that vision,” Parker says. “I saw that immediately in Don and Deyon, and thought, `Yes, I could work with these people.' That was 28 years ago, and I’m still at it. And I know I would not be here today if not for them.”

Parker, describing Stephens at sea while the Africa Mercy was sailing to Madagascar, calls him “a classic visionary … He has the ability to get people to step up and pursue these very unthinkable goals.” 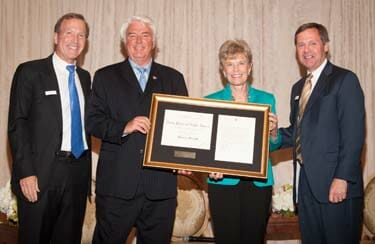 Mike Ullman, chair of the Mercy Ships board of directors and CEO of J.C. Penney, met Stephens 26 years ago. The two became friends when both were working in Hong Kong, and Stephens eventually persuaded Ullman to get involved with Mercy Ships.

“I was chair of Macy’s at the time, and Don told me, ‘I need accountability, and I don’t have anybody yet,’” Ullman says. “Any time he shares his original reason for what he was trying to accomplish, it’s very compelling.”

Stephens, Ullman notes, was influenced to start Mercy Ships after meeting Mother Teresa and confessing to her his feeling of being burdened by caring for his and his wife’s severely disabled child (now in his 30s).

“He was asking, like most people would, ‘Why us?’ And she challenged him to consider, ‘What is your dream and what are you doing about it? … What’s weighing on your heart?’ He turned that energy into doing something for others,” says Ullman, who is disabled himself. “He changed my life. He is absolutely a very positive, forward-leaning person.”