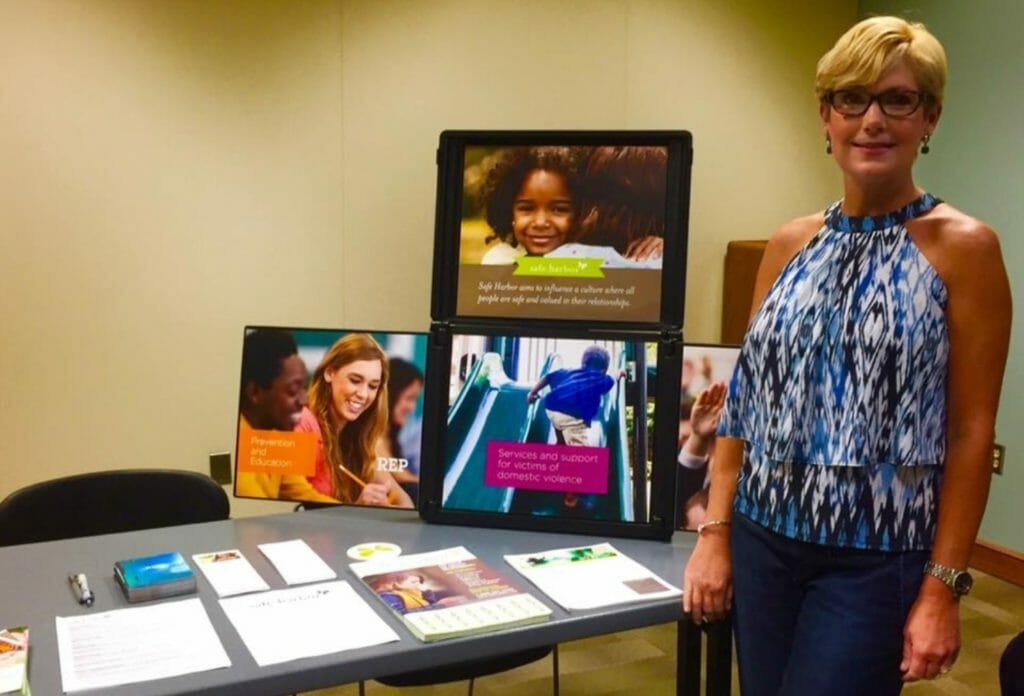 The pattern for relationship violence started early for Angie Dickmeyer. Starting with an abusive ex-boyfriend in high school, Angie fell into one abusive relationship after another as an adult, never sure how to end the abuse or who to reach out to for help. The Easley, South Carolina, resident realized she wasn’t alone when she began to encounter women just like her who were also facing relationship abuse in their homes and elsewhere. Now ranked the fifth worst for domestic violence rates in the country, South Carolina had the highest rate of women murdered by men in the U.S. in 2011, more than double the national average. After years of abuse, Angie sought counseling and began educating herself about abuse, and started volunteering with Safe Harbor, a nonprofit organization that provides services to victims of domestic violence and their children. Now an ambassador for Safe Harbor, Angie uses her platform to speak out about her experiences and advocates for abuse victims, and is today’s Daily Point of Light Award honoree. Points of Light spoke with her to learn more about how she’s making a difference.

Why is it so important to you to highlight this cause?

Starting in high school, I was with a very abusive boyfriend. He tried to drown me, and choke me. I don’t know what it took for me to finally tune in that this wasn’t normal. It’s hard for people to say the words ‘domestic violence’ and get help. It’s almost like people turn their heads. When these things were happening, when I was in abusive relationships, we often weren’t alone. There were other people around, people just turned their heads. And it’s not always physical — you can be abusive just by your actions and the way you talk to and treat people.

What changed for you?

Getting a lot of education has helped me. When I was a kid and for part of my adult life, I don’t think I ever really saw any good relationships. Becoming an adult and going through what I went through, I made a decision. I liked myself, and I knew it wasn’t me causing this violence. Once I saw that, it woke me up, knowing that you can’t change abusers.

How do you use your experience and your work to connect with others?

There is a feeling of being trapped, because (the abuser) wants to isolate you from everybody else and wipe away any sense of self-worth. I can remember my phone being taken away, no money, no ways or means to try to help yourself because that was stripped away. Walking on eggshells is how you live your life, because you try not to cause anything that’s going to make them blow up. As a hair stylist, women would confide in me, because they felt comfortable, and now, as a manager at Clinique, I am able to connect with women as well. I work with another group called Cut it Out, an organization that provides training to salon professionals and others to fight domestic abuse by building awareness and training salon professionals to recognize warning signs and safely refer their clients and others to local resources.

Where does your dedication to help others come from?

That’s why I’m working where I am during the day, because primarily everybody I work with is a woman. I’m still getting that connection with people who may need help. When I leave in the morning, I say a prayer, it’s all about who I run into throughout the day, and how I help them in some way. How can I lift them up, and if they’re going through something, how can I make sure I say or do the right thing to help make a positive difference? I’m 52, and I believe that we’re all here for a reason and I think what happened to me was so that I could do this now.

Why is it so important to give back to the community in this way?

Because of where I live, it seems to affect so many people. And it’s affected me so much in my life, there were so many years I threw away because I didn’t know any better. If I could have taken that back, a lot of it had to do with self-esteem. I don’t want to see other people waste their lives like I did. I want women to be strong and be able to stand up for themselves and not even make a decision to even be with a person like that in the very beginning. I’m passionate about starting with kids in middle school before they even start dating. Abuse doesn’t discriminate – it’s with men and women, starting at a very young age, of all demographics.

Find out what you’re good at and what you can help share. Experience, money, however you can, to make a difference where you live. To me that’s what it’s all about. I don’t think I knew that when I was younger, but now that I’m older, I realize, it’s why we’re here, is to give back.

What’s next for you?

My goal is to do whatever I’m led to do. I think as long as I’m doing something to help, whether it’s at work, or with Safe Harbor, or whether it’s through a documentary I’m working on with a producer, ‘Destined to be Heard.’ We’re putting this documentary together that will educate viewers about domestic violence to distribute to schools and local businesses. There are too many people that are quiet about (abuse) because they’re embarrassed. We want to change that through education.

Do you want to give back to your community like Angie? Visit All For Good to find local volunteer opportunties.