This week – in coordination with the National Education Association’s annual Read Across America Day, March 2 – Points of Light and First Book are honoring volunteers who are teaching children to read. Meet Cara McCollum, today’s Daily Point of Light Award winner, and nominate someone you know as a Point of Light. 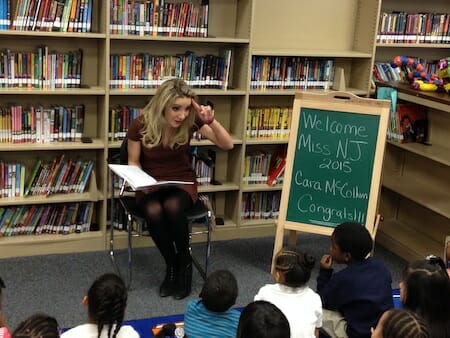 Cara McCollum reads to children at a library, one of many library visits across New Jersey.

When Cara McCollum was 10, she started volunteering for Toys for Toys – the program known for collecting Christmas gifts for children who might otherwise go without.

“Over the years I got to be known as the ‘book lady,’” she recalls. “We got all these book donations and I took to the task of organizing them like a serious librarian.”

She’d set up her book table every year and help parents pick out the perfect books for their children’s presents. “I was very disheartened when parents would walk past my table and go straight to the toys,” she says. “So I started sneaking books into their bags and thought, `There has to be a better way to get books to kids.’”

In 2008, while in high school, McCollum founded the Birthday Book Project – a nonprofit that sends new, gift-wrapped books to children in need for their birthdays. The organization started by giving away 300 books and has grown to give away about 8,000 annually.

McCollum dreamed of getting books directly into the hands of kids in kindergarten through fifth grade on their birthdays, promoting the idea that reading is a gift. She says her small-town upbringing in Forrest, Arkansas, played a part.

“The Arkansas delta is a very impoverished and educationally apathetic place and that was the community I grew up in,” says McCollum, a student at Princeton and a former Miss New Jersey. “Books for me were a way to get away. I would read these books and they would transport me across the globe and see places I hadn’t seen in real life.”

McCollum says she was fortunate to have parents who encouraged her to check out books from the library and read. She credits her love of books for getting her to where she is today: “I go to Princeton. I read about it in a book and it seemed like a magical place.”

In the beginning, McCollum and her mother would spend hours on eBay looking for books to give to children. Now they partner with First Book, a nonprofit that provides access to books to children in need. The Birthday Book Project now gets all its books from First Book.

So far, McCollum has delivered more than 25,000 books to children throughout New Jersey and Arkansas. She was named the New Jersey State Library Champion of the Year in 2013 (the same year she took the crown as Miss New Jersey), which gave her the opportunity to host story times at dozens of libraries.

McCollum says that through the Birthday Book Project she hopes to “broaden kids’ imagination and have them learn about different places they’ll want to visit someday.”