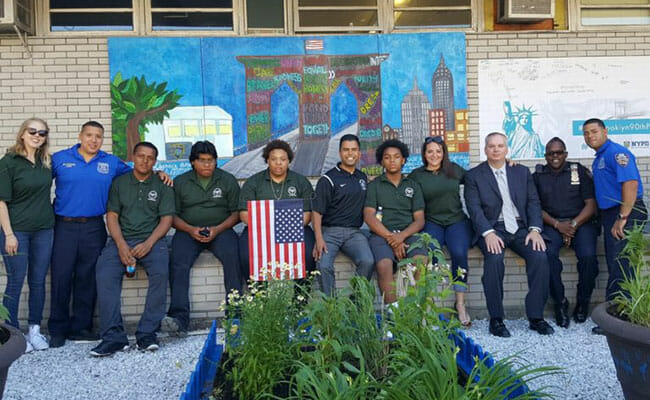 Throughout the country, relationships between police and community members has been strained and contentious. But in one Brooklyn community, police and youth are working together to bridge the gap, better understand one another, and beautify the community through service.

Teens from the Usher’s New Look foundation and NYC Together partnered with police from the 90th precinct in the Williamsburg neighborhood of Brooklyn, New York, to plan and create a mural to beautify the precinct house.

Over the course of 10 weeks, the teens and police attended interactive workshops to facilitate conversation and learning from each other in an informal setting. They also spent time planning the mural, learning about service work, project planning and community beautification.

“Often times these kids feel voiceless, especially with police,” said Dana Rachlin, founder of NYC Together, an alternative-to-suspension program for students facing school disciplinary action in North Brooklyn. “These workshops and conversations helped the teens feel heard by people who they often feel dismissed by.”

“Usher’s New Look focuses on students using spark to bring change in their community,” said Careshia Moore, national program director for Usher’s New Look, which seeks to equip young leaders with the tools to shape their own future. “For the teens to see they could use words and art, could come together and create change, it empowers them. They realize you don’t have to have millions of dollars to bring change in your community, it starts with using the gifts and talents you have.”

The mural depicts the Brooklyn Bridge – an iconic New York City landmark – covered in words of positivity, while negative words float away in the river below. This joint project has helped to foster trust and understanding on both sides.

“This experience changed my judgement of cops and allowed me to realize not all cops are bad,” said Kayah Phillips, an Usher’s New Look student.

NYC Together member, Keith Williams, agrees. “I learned there are people like Dana, Officer Posada, Officer Melendez and the chief that want to see you make your life the best it can be,” he said.

This experience has improved the community immensely, by helping community members to see the precinct as a community space. Additionally, it has inspired the teens to continue engaging other teens in service.

“I hope to create a youth group and connect them with other organizations like Usher’s New Look,” said Kayah.

“I hope to help the community by doing the same thing this program did for me,” said Keith. “I want to help other kids who may not have the opportunity to be the best they can be.”

To recognize their incredible efforts, the teens were given the Daily Point of Light Award, which was presented in Atlanta at the inaugural Disruptive Innovation Summit, hosted by Usher’s New Look.