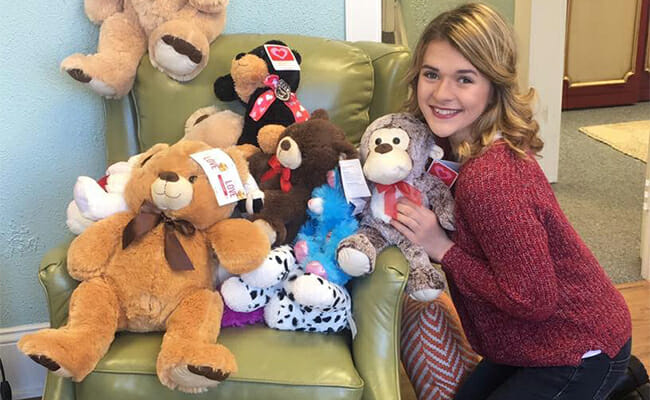 At the age of 15, Grace McAllister already understands the restorative power of giving back. After being sexually abused by her father from the age of 6 to 10, Grace found the courage to tell her stepmother – and endured months of interviews, counselors, lawyer visits, a court appearance, and disbelief from some family and friends. Left feeling alone and isolated, she spoke up once again, creating a YouTube video to tell her own story and to encourage other victims to “break the silence.”

Through her program, Grace has collected and donated more than 1,000 new stuffed animals to comfort children traumatized by sexual abuse, and in 2017, she was recognized as a state honoree for the Prudential Spirt of Community Award.

“I have gained the knowledge that I am a survivor, not a victim,” says Grace. “I have seen that small tokens of love and hope can make a difference. I have gained back myself through volunteering.”

We spoke with Grace to learn more about You Have a Friend In Me and her commitment to helping other abuse survivors.

What motivated you to start You Have a Friend in Me?

I know how lonely I felt when I was going through the whole court processing and even beyond that, and I just wanted to give other victims something that they could hold onto during these hard times.

What have you learned through creating this program?

I’ve learned that you don’t have to let abuse define you. For the longest of time, I thought of myself as someone who was abused by their father. But after I started You Have A Friend in Me, I realized that I’m not just a survivor of abuse. I’m someone who uses her experiences to help other people.

What is your favorite memory from your volunteer work?

About two years ago, I was invited to speak at the family resource center to help them kick off Child Abuse Awareness Month. This was my first time speaking in public, and though it was nerve-wracking at first, I felt so powerful speaking about an issue that’s close to my heart.

Where do you hope to see You Have a Friend in Me in five years?

Hopefully, in five years we will have become a nonprofit organization, and we have stocked all of the resource centers in Mississippi with teddy bears, and we will be working on stocking the surrounding states.

There is an abundance of problems in society and if we come together on issues we are passionate about, we can make a difference. Not only will this impact society, but it will also make people feel good about themselves, because they helped make that change.

What advice do you have for other volunteers who want to do something to support abuse survivors in their community?

First, I’d want to thank them for being a part of the change. Then, I would tell them that they can help by donating teddy bears, creating a support group for their community, encouraging victims to speak out, or just be their friend in this time of need.