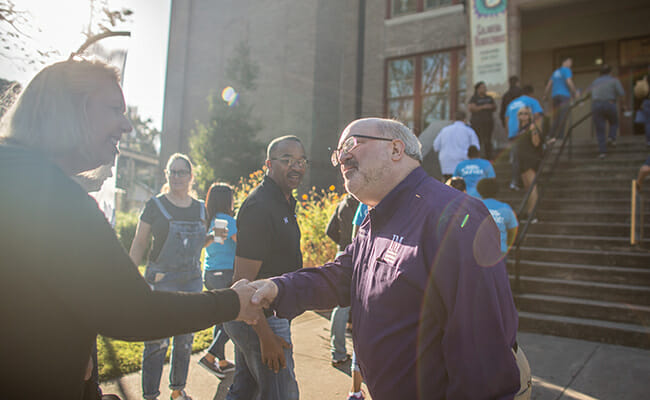 Many years ago, as a fellow of Leadership Philadelphia, I attended a seminar where an accomplished anthropologist spoke about the power and influence of networks. She asked the group of leaders, “what is the most valuable currency that will move a critical agenda forward in your company or organization?” Fellows, which included CEOs, executive directors and other C-suite leaders, took their best guesses – money, power, position, influence – but none were correct. The greatest currency? Trust and respect, she shared. That is the currency that moves civilizations.

When we think about today’s society, it’s evident that  trust and respect are valuable. When present, this currency propels economies and provides limitless opportunities with connections we make through popular apps – allowing us to stay in a stranger’s home while on vacation, or to take a quick ride to work with someone who drives their own car for a couple of hours each day. These are signs of the power and potential this currency provides, when trust and respect are present. The lack of it impacts our daily lives, from how we navigate our personal and professional relationships, to our confidence in important institutions. As we try to build a better world and move society forward, with the greatest currency seemingly lacking in critical places, I feel compelled to ask: who is responsible for change?

Last month at the 2019 World Economic Forum in Davos, the Edelman Trust Barometer was released. This study, in its 19th year, measures trust around the world in formal institutions – including government, media, nonprofits and business. The results were staggering. Only 1 in 5 individuals feel that these systems are working for them; nearly half the population believe these systems are failing them.

As the world faces more political challenges, people are losing faith in the power of government. Here in the United States, we just concluded the longest government shutdown in our country’s history. Political unrest continues around the world as individuals want and expect more.

We see people turning to businesses, specifically their own employers. Of those surveyed in the Trust Barometer, 76 percent said CEOs should take the lead on change, rather than waiting for the government to impose it – an 11-point increase in the last year. Further, 73 percent of people also agreed that a company can increase profits, and improve economic and social conditions in communities where it operates.

Interesting swings in the pendulum, when just 10 years ago the same Trust Barometer told a very different story. In 2009, after the financial crisis of 2008, people were looking toward government to fix challenges and hold businesses accountable. Only 38 percent of people surveyed back then had trust in business.

Now, people are starting to think locally, trust locally, and invest in their local networks. The currency of trust is moving to local communities.

Each year, Points of Light polls U.S. businesses to establish The Civic 50 – honoring the 50 most community-minded companies in the country and turning their results into a benchmarking report. The results from last year showed these same trends to be true. People are expecting more and companies are answering the call, moving from just being supporters of causes to becoming stewards of community resources, working in partnership with people and organizations to drive meaningful change in the communities where their employees work and live.

However, businesses cannot become the sole entity relied upon to do good. While many companies have found ways to innovate and increase shareholder value, and commit resources to social progress through their corporate social responsibility programs, not all companies are achieving this balance.

So when we think about the earlier question – who is responsible for change? – the answer, I think, is that it requires partnerships, an intersection of many groups, but it starts with individuals. Individuals who may possess money, power, position or influence, but more importantly, individuals who hold the greatest currency in the world, trust and respect.

In my last blog, I talked about the force of human kindness. It is the lack of kindness and empathy that leads to an unjust society. When you see someone with less, but don’t care. When you see someone being bullied, but don’t stand up. When you see a woman being harassed, but don’t intervene. This lack of empathy, the ability to look away, creates a sense of “otherness” and is likely the initial seed of mistrust. It is the force of human kindness that will change this trend – but it will take every person, man, woman and child, to act to create this wave of change.

People outside business and government must work to make change locally, get involved and raise their voice. People within institutions must speak up and say, “we can do better.” It takes all of us.

Indeed, we have the power – there is light in all of us, and we must use it for good.

Season of Giving: Embrace the Power of Your Purchases

Civic Engagement: What We Know, What We’re Learning, and What Comes Next

8 Ways to Give Back on Family Volunteer Day