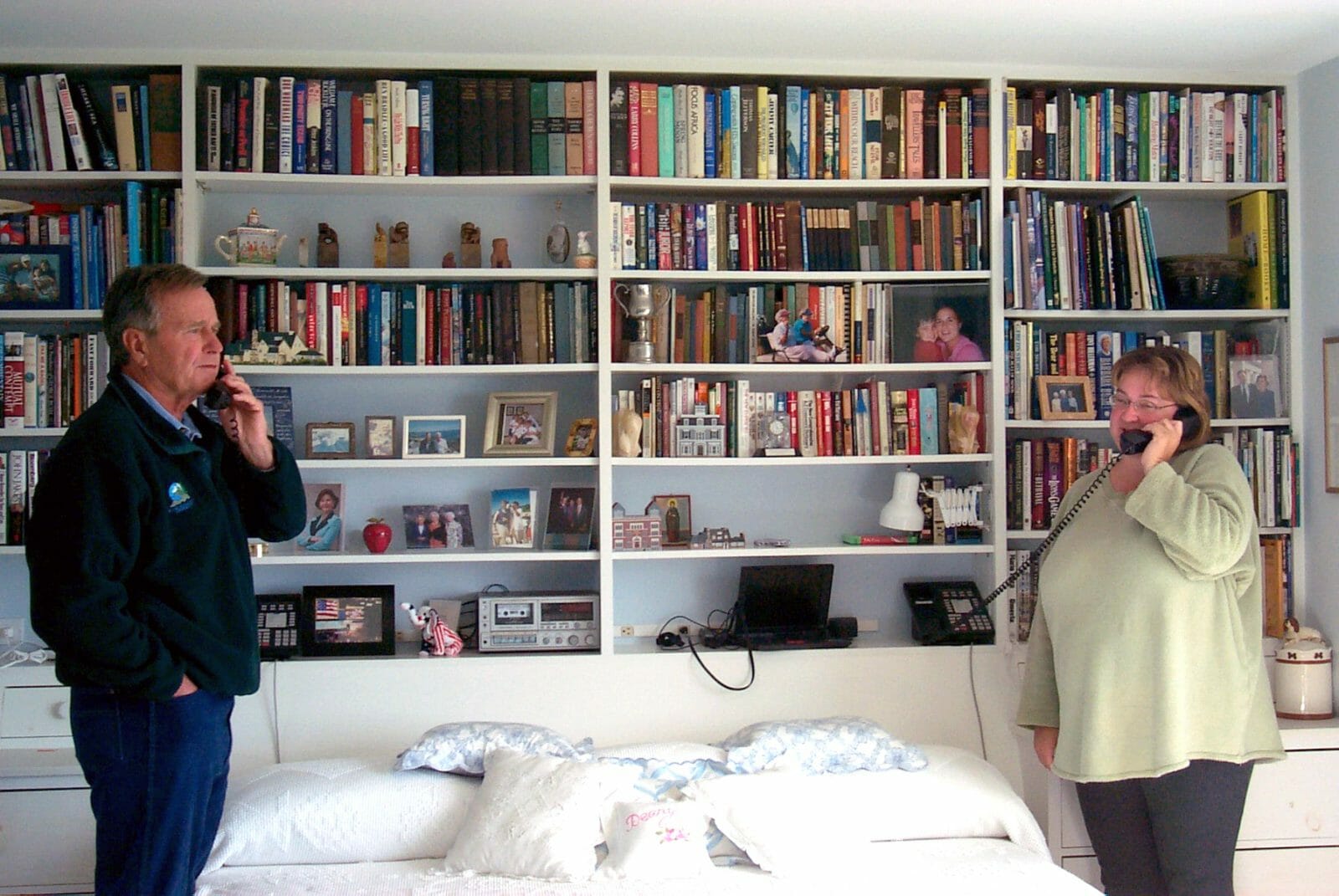 Points of Light board member Jean Becker is one of the few individuals who got the chance to work side-by-side with the organization’s founder, the late President George H.W. Bush.

She is the author of the compilation, “All the Best, George Bush: My Life in Letters and Other Writings” and her most recent publication, the New York Times Bestseller, “The Man I Knew: The Amazing Story of George H.W. Bush’s Post-Presidency,” published in 2021.

After serving as President Bush’s chief of staff for 25 years, Jean has ample wisdom to share with the world, and according to her, much of it was inspired by her time in the White House. Points of Light’s success and the legacy of the former president is deeply personal to her.

Jean first connected with the Bushes while reporting for USA Today during the 1988 election. One of her assignments was to edit weekly columns written for the paper by Barbara Bush and Kitty Dukakis (her husband, Massachusetts Governor Michael Dukakis, was the Democratic candidate for president). After the election, Jean was offered the job as deputy press secretary in the First Lady’s office. The offer threw her a bit – she loved being a reporter – but she quickly realized this was an opportunity and honor to which she must say “yes.”

When the President lost the election in 1992, Barbara Bush asked her to come to Houston with them to help research and edit her memoirs. Within a few years, she had grown close with the Bushes and eventually became President Bush’s chief of staff in 1994.

And while her roots in service were undeniably impacted most by watching the way the Bushes lived their lives, Jean has early memories of seeing service in the small Missouri farming community where she grew up.

“My mom and dad were both amazing volunteers in their community in their own way,” Jean said. She described watching her parents looking out for their neighbors — her mother taking casseroles to families who had lost a loved one, her father filling in to do planting or harvesting if another farmer was sick. “So I had this wonderful example of them pitching in, always helping, always being there. It was always informal — neighbor helping neighbor.”

Jean volunteered in various ways throughout her school years. She did a walk-a-thon for March of Dimes in high school. She was a candy striper at the local hospital. But after going to college for journalism and reporting for ten years, she landed the job of a lifetime, and one that would change her forever.

Jean’s trajectory of civic engagement, she says, was profoundly shaped by the Bushes. In her chief of staff role, she would watch the way the team responded to any sort of natural disaster or crisis with service. President Bush took immediate action, flying to the sites and stepping in where needed.

The office would do a charity Christmas project every year, adopting a family impacted by Hurricane Katrina or military families, for example. For three years, the president’s office staff gave “Secret Santa” gift bags with Walmart gift cards, Christmas ornaments, household goods, and chocolate to people riding the city buses. “The Bushes showed me that getting involved and making a difference is something we need to make time for,” Jean said.

President Bush founded the Daily Point of Light Award in 1990 and Jean watched the award recipients become enamored with him. When the George H.W. Bush Presidential Library and Museum opened at Texas A&M in 1997, there was a celebratory event with 20,000 people, including former and current heads of state. President Bush invited the Daily Point of Light honorees from Texas and the surrounding states to join.

After the three-day celebration, the Bushes were absolutely exhausted from shaking hands, attending luncheons and dinners, and making speeches. They returned to their campus apartment to take a nap when Jean heard some commotion outside. She went to check out the source of the noise and found the Daily Point of Light awardees gathered together and asking to meet President Bush in person.

“And here he comes, after hearing all the commotion,” Jean remembers. “And they yelled, ‘Mr. President, we’re Daily Points of Light!’ And he stood out there and talked to them. He felt really connected to them. He felt they were all heroes.”

Today, Jean is adamant about carrying on this legacy of prioritizing service and volunteerism. She feels that President Bush left us a blueprint on how to lead a life well-lived through contribution to our communities.

Jean recalls, “President Bush used to say that somewhere in America every single problem is being solved. It’s not necessarily your government. Sometimes it’s your local United Way, your next door neighbor, your local nonprofit.”

Today, Jean supports multiple causes, including literacy, which was championed by former first lady Barbara Bush. She has participated in numerous events alongside the staff of the Barbara Bush Foundation for Family Literacy, recently spending the morning volunteering at Martha’s Table in Washington, D.C., packing food bank bags.

Besides Points of Light, she sits on the board of several nonprofit organizations, including one at The University of Missouri dedicated to teaching youth about the importance of the constitutional democracy. She is on another board with Lauren Bush Lauren that works to promote civility in today’s culture. One idea she has is to organize volunteers to help deal with the humanitarian crisis on the border between Texas and Mexico.

“This is the first time I’ve said this out loud. It’s been a crazy busy year for me as I’ve been doing a lot of book events and traveling a lot this fall, but in 2022, I’ve been thinking that I’d like to get even more involved,” Jean said.

To her, Points of Light’s goal is to help individuals and other organizations answer the question, “How are you solving a particular issue in your city?” Jean says she could have used Points of Light in her 20’s and 30’s because it would have helped her figure out what she was passionate about in terms of civic engagement, and how best to contribute her time and effort.

“Points of Light’s Civic Circle, in my mind, means nobody has an excuse ever again not to figure out a way of getting involved. If you can’t find your niche on that Civic Circle, what rock are you living under? It provides all the different portals you can march through.”

Jean recommends finding your passion or focus area and then getting involved, regardless of your situation in life. She says that volunteerism and service shouldn’t be about checking the boxes, and only through finding something that ignites you will you keep from growing tired, bored or frustrated with it.

Jean quotes President George H.W. Bush, “There can be no definition of a successful life that doesn’t include service to others.”